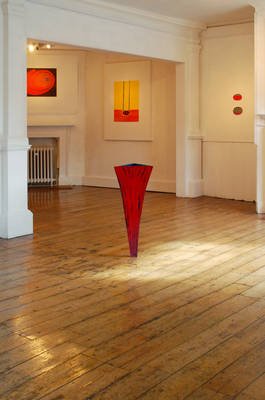 The Artist in Residence this year, Ian Wilkins, has taken the new term and creative roll at Marlborough College all in his stride. The challenge of organising an art exhibition here would definitely get to some, but when we meet Ian in the transformed Mount House Gallery, he emits an aura that is cool, calm and collected.

Surrounded by his work, he looks quite at home. One can easily tell that much time, effort and thought has gone into the array of his beautiful prints on display. Their bright colours and bold shapes are perfectly complemented by the stark white walls of the exhibition space. His infectious passion for his art is evident in both his pieces and when he speaks to us, and it is this that makes him a truly valuable member of the Art School.

You’ve presently have a solo exhibition in the Mount House Gallery. Are you happy with it? Yes, very happy.

It’s such a complementary space, which really makes a difference. A show I went to in Cardiff had horrible pale tiles on the floor, which really distracted from the art, so immediately all the floor installations were lost in the sea of tiles. The Mount House is really beautiful. The only difficulty in setting up the exhibition was having to accommodate radiators and fire alarms, but you can work around them, if you play around and see what works best. In a way, the show became one whole piece of work, because of the shared language of all the pieces.

For me, it’s not so much about the meaning behind my work. I just like my work to be able to stand for itself as an interesting object and a strong piece of graphic imagery. That’s why I’ve never been able to title work. They can be the meaning themselves, without having anything else influencing them.

What is your art influenced by?

It’s very tricky to pin down some references. I’m a big fan of Philip Guston, whose approach to painting is very interesting – he draws with paint. In regards to printmaking, 20th Century Mexican printmakers, such as Diego Rivera, are a definite favourite of mine.

Have you always preferred printmaking, or have you experimented with other media and evolved into eventually using it?

When I was doing my Masters I focused purely on printing, but with a mixture of techniques using wood and lino, for example. The greatest thing about printmaking is that you’re able to repeat something over and over again, changing things slightly, until you are happy with it. It allows you to build a history of what you’ve done. And, of course, there’s that magical time where you put something into a press, not knowing what it will come out like exactly. You can’t do that with painting, so that’s where I think printing’s really got the edge. Recently though, I’ve started incorporating a lot more drawing into my smaller MDF works, as it is so much easier and quicker to add smaller details, rather than make another wood block. It also allows you to embellish work by adding another layer on top. Gel and marker pens produce a particularly fascinating opaque effect.

Works by sculptress Lucy Strachan, entitled ‘Earth Eclipse’, ‘Slash’ and ‘Lawn Spawn’ graced the lawn of Court two years ago. Would you like to do something like that: an enormous three-dimensional installation for Court?

That would be amazing, what a good idea! If I had the right resources I would. You’d probably end up needing people to help, if it is something of that scale though… What about the Art Scholars? Yes! A collaborative piece with the Art Scholars would be brilliant!

By Amy Murgatroyd (SU U6) and Ibby Dalrymple (MM U6)