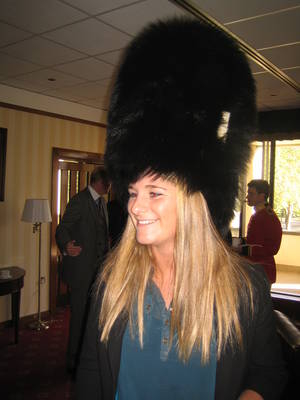 We arrived at the Wellington barracks home to the Household Division and the ceremonial companies of the Grenadiers, Scots, Coldstream Guards where we were introduced to a few Officers, some of whom were OMs.

We then walked over to Buckingham Palace through the crowds and gates to take up our front row seats to watch the changing of the guard, which was a very special experience.  Later we visited the Guard’s room where the soldiers stay whilst on duty at the palace. It was not luxurious as I expected and as it only contained a few metal bunk beds and cabinets.

After lunch we visited the Guard’s museum where we saw a whole array of different uniforms dating back hundreds of years. On our final visit to the Guard’s Chapel we saw all the colours (flags) covering the wallls that had had been through many different battles.  This really gave us an amazing sense of the progression of military history.