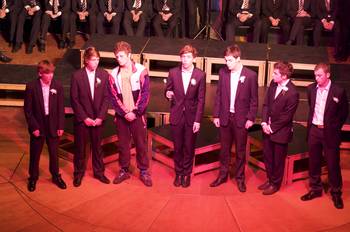 The Mem Hall was packed to capacity on Thursday afternoon for this year’s House Harmony competition. First to perform was New Court, with All Good Things Come to an End. The group produced a wonderfully ethereal sound with some interesting whistling effects which had the audience spellbound. They were followed by C2, with If I had you here: their additions of drum beat, vocal clicks and silent pauses created an impressive effect. Summerfield were next, with an impeccably controlled pianissimo start to Welcome Home. The harmonic range here showed the mixed voice group’s potential off to good effect. They were followed by Ivy House, making their first appearance in the competition with Pompeii. Crisp and rhythmic, this was a very good performance.

Littlefield were next, their song, Zorbing, showing an impressive combination of subtle harmonies and a well controlled dynamic range. B1 took the stage with All Delighted People: this was a fine performance, full of contrasts and with a freewheeling quality that showed a confident group on top of their game. This was followed by Elmhurst, performing Lady Percy, a neat arrangement confidently conveyed in upbeat style. C1 were on next, singing We Are The People and bringing out the song’s strong beat and compelling drive. Turner House’s choice of the Amy Winehouse song Valerie had a relentless drumbeat effect which gave it an enjoyable energy.

Two Beatles numbers followed, firstly Help from Barton Hill in a richly harmonised and very successful arrangement, and secondly In Spite of All The Danger from Preshute, beautifully sung, with excellent balance between the voices. Cotton’s powerful BTSTU included percussion, rap and a well controlled subtlety of dynamic contrasts. After that, the 10 strong group from Millmead produced a fine performance of Get Home, by Bastille: this large ensemble was clearly in full command of the song. To round off the afternoon, Morris House had chosen Africa, a song which allowed virtuoso opportunities which were brilliantly executed.

This competition had shown one of the best overall standards in recent years and was a feast of high quality unaccompanied singing. In summing up, the adjudicator, Dr Tim Ridley (former Director of Chapel Music at Marlborough and now Director of Music at Glenalmond College, Perthshire), paid tribute to all the performers and, highlighting the essential ingredients of intonation, ensemble and musical communication, he awarded 3= place to Barton Hill, Cotton House and Elmhurst, 2nd place to Millmead, and the trophy to B1.