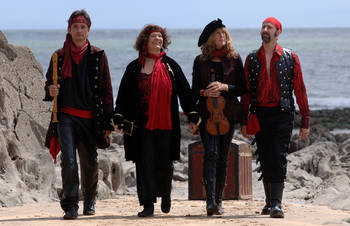 ‘Beautifully eccentric’, ‘colourful’, ‘brimming with virtuosity and originality’ and ‘absorbing’ are just a few superlatives that one could apply to the concert given by Red Priest in the Memorial Hall as the second concert in the series of the 2012/13 Marlborough College Concert Series season.

The change of harpsichordist to David Wright has in no way affected the equilibrium of the group.  In fact the ensemble was delivered to perfection, rubato was carefully crafted and musical lines sensitively constructed and when you match that with the technical proficiency on display, the net result was an intoxicating brew of consummate musicianship and artistry.  Tom Edwards’ (our new Graduate Drama Assistant) lighting further added to the spectacle and with a packed audience to create that special atmosphere, it was an evening to remember.