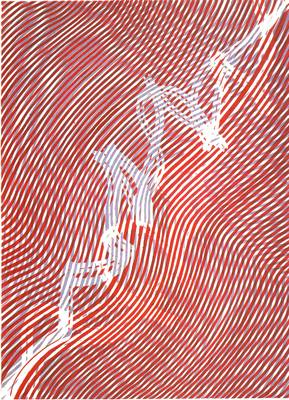 ‘Stanley William Hayter (1901-88) was perhaps the greatest and most original printmaker of the twentieth century’. This sentence, taken from the introduction to the complete catalogue of Hayter’s prints, is not written lightly.

Hayter trained as a chemist and his technical prowess was always perfectly in tune with an imperative for personal expression. He put much time into experimentation, developing new innovations and methods for printmaking throughout his life. Hayter attracted many artists to work alongside him in Atelier17, a studio he founded in Paris in 1927. Among these were Picasso, Calder and Lipchitz. This studio played a central role in the 20th century revival of the print as an independent art form. In 1940, Hayter opened an Atelier in New York and through this became a ‘dominant figure in the launching of Abstract Expressionism. He taught Jackson Pollock how to make prints, as well as working with Robert Motherwell, Willem de Kooning and Mark Rothko.

The prints in this exhibition will give the visitor a rare insight into Hayter’s evolution as an artist and printmaker. There are examples from every stage of his development. We are immensely grateful to Dave Richards for allowing us to exhibit this selection of prints from his collection.