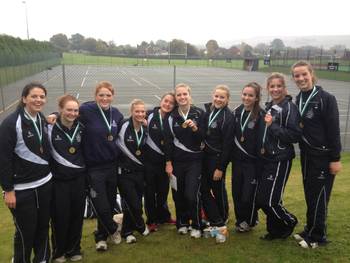 On Tuesday 9th October, the 1st team netball girls travelled to Dauntsey’s School for the annual county netball tournament. After qualifying last year for the first time in 10 years, the girls were determined to succeed again in order to progress through to the next round. In the group stages, the girls had convincing wins over St Johns, St Laurence, Hardenhuish, St Mary’s Calne and Dauntsey’s to become the group winners. The team went from strength to strength throughout the day despite the cold, wet and windy weather conditions. The girls progressed through to the semi finals where they faced a very talented New College team full of club and England development players.

The team were extremely focused on the outcome and played what can only be described as the best netball I have seen Marlborough College play. The ball flowed from one end of the court to the other with ease and the girls looked after the ball with care. Sophie Spink (MO L6) was outstanding in the middle of the court and demonstrated speed and control throughout, Lucinda Manning (LI L6) and Ella Stopford Sackville (NC U6) were both extremely calm shooting under pressure. The girls went onto win 10-6, a fantastic performance. The team then met Godolphin in the final where they continued their fine form winning 10-7 where they were crowned County Champions which means they now progress through to the regional round in February. Player of the tournament went to both Manning and Spink.