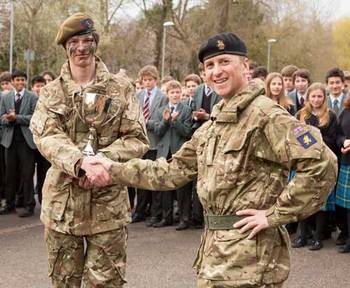 After lunch the Inspecting Officer was escorted by Cadet RSM Clark Bryan (BH) to the College swimming pool where he was introduced to Second Lieutenant James Auty (JNA) and Mr James Lane conducting 1 Section of the Remove Cadets taking on a Waterborne Command Task. After watching 1 Section successfully negotiate the hazards of the pool Cadet Sgt Giles Skrine whisked the inspecting officer away to watch the remaining three sections of the Remove tackle the challenge course on the Water Meadows conducting proceedings was GMT and HMS well assisted by Cadet Sgt’s George Malloch-Brown (CO U6), Ollie Herbert-Williams (B1 U6), Kit Betley (PR U6), Josh Clarke (TU U6) and Alexander Rhodes (TU U6).

After a chat with the Remove the Inspecting Officer was then led off to Granham Hill by Cadet Sgt Alexander Aldridge to meet the Hundreds Cadets who were conducting a Blanking Firing Exercise dealing with casualty evacuation in a Minefield whilst under fire! Cadet Sgt Harry Keville (TU U6) took over as narrator as the Inspecting Officer saw the Hundreds being put through their paces. This was staffed by The Contingent Commander, Major Randle (RLR) as Ex Conducting Officer with Exercise Safety being provided by Captain Garry Doyle (GAD) Head of Chemistry, Lieutenant’s Armitage, Birkill and Finn (DRA, TAB, PAF).

After a successful extraction of the casualty from the minefield and a few flashes and bangs, Cadet Sgt Alexander Rhodes delivered the Inspecting Officer to the 25-yard Indoor Range; Cadet Sgt Samuel Day (PR U6) then introduced the Inspecting Officer to the L6 Form Cadets who were conducting an Air Rifle Shoot in the Range with Range Conducting Officer Captain Sandra Finn (AJF), Head of Maths, Safety Supervisors for the day were SMI A Everall, Berkshire ACF and Sgt M Hepworth, CTT Colerne, Detachment.

The day was finished off with a high tea in the CCF Conference room with all CCF Officers and the Upper Sixth Form Cadets in attendance. Following tea Brigadier Hankinson MBE, presented the Best Shot Trophy to Cadet Thomas Goble (B1 Hu) and he then addressed the Contingent.  He emphasised the unique experiences and skill sets that the CCF offers cadets as well as the opportunity for ‘once in a life-time’ travel experiences, participation in unique courses as well as personal development of life skills, self-reliance, commitment to one’s self and one’s team, resourcefulness and self-discipline to name but a few.

His greatest compliment to the Contingent was his comment about the self confidence that he had witnessed by the cadets during his time with the CCF during the afternoon.