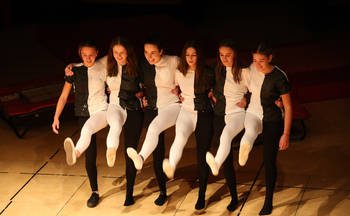 The Michaelmas Term 2014 Illumination was shrouded in controversy; it was on a Saturday Night. Would the hordes of Sixth Form sacrifice their pub trips and Malburian shenanigans to come and watch?

Those who did were not disappointed.

The crowd were anxious to see the new heads of Illumination in action but Calum and Alice proved to be more than capable of pumping the audience up and getting everyone excited for the acts to come.

The evening began with a Remove band performing an original song. Tertia Paterson (MO Hu) sang brilliantly and the band played amazingly, getting the audience cheering and screaming by the end of it.

The night was punctuated with comedic impressions from Ollie Swainston (BH U6), which had everyone rocking in their seats with laughter. The Hundreds from Mill Mead performed a weird and whacky optical illusion; when they sidestepped onto the stage in strangely coloured unitards everybody wondered what on earth they were in for but by the end nobody wanted them to stop. The girls were swooning at heartthrob Henry Alexander’s (BH U6) beautiful guitar playing and silky vocals.

This was an Illumination which proved all the doubters wrong!