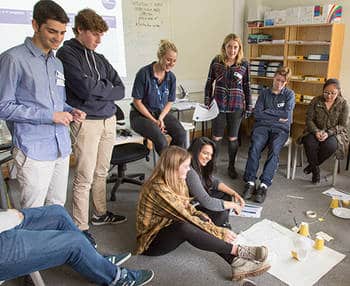 Lower Sixth pupils have been taking part in a Leadership Day along with the Year Twelve pupils from Swindon Academy who joined them to share the experience.

The day was run by a team from Future Foundations who lead them through a number of challenges with verve and enthusiasm.  The structure of the day was cleverly paced and there was a good balance of energising exercises and cerebral activities.

The Swindon Academy pupils were a great addition to the day – their presence altered positively the dynamic of the teams. Their teachers were thrilled with how everyone interacted and also drew attention to how welcoming our pupils were.

The event represents an important stage in the evolution of leadership within the College, building on the post IGCSE week, the L6th Leadership Forums and establishing a strong foundation for the pupils as they take on positions of responsibility and develop their profiles in the Upper Sixth.