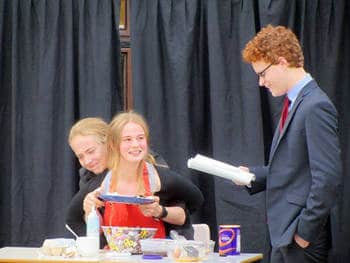 An expectant crowd of pupils and beaks gathered in the Language Centre courtyard on Monday evening for this year’s open air Lower Sixth Festival.

With a total of eight languages represented, once again we were in for a celebration of spoken language by the rising stars of the language department.
The groups did not disappoint!

The Russians started with an entertaining restaurant scene, followed by a Spanish group with a take on Master Chef Chile. Hannah Biddle (MM L6), resplendent in kimono, sang a beautiful Japanese song “I look up when I look down” to rapturous applause. The second Spanish group entertained us with Jabrocal, their attempt to translate “Jabberwocky” into Spanish, using the levels of the open air theatre. Next we were transported to 18th centaury on a stormy night, with a re-enactment of Goethe’s poem “Der Erlkonig”.

Next on was our visiting French Exchange group from Paris, who took us into the world of witch trials with “Burn her, save her!” Their English diction was excellent and added further to the enjoyment of the evening. After that the Italian group returned to the theme of food with their Bake off Italia sketch “Non sono le mie mani!”, hilariously performed by Harry Drew, Sophia Hamilton-Russell and Sonya Vakhonina. Following this, the Chinese students performed an idiom drama entitled “Painting snakes and adding feet”, enacting this idiom that is roughly the equivalent of the English expression “to go over the top in doing something”.

In praising all the performers for the spirit of improvisation and inventiveness, the judges awarded the first prize to the Italians with “Non sono le mie mani!”

Many congratulations to all the L6 modern linguists on an excellent and highly entertaining evening.