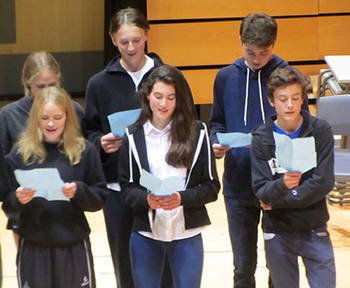 On Tuesday evening the Remove gathered with excitement in the Ellis Theatre for this year’s Eurovision Song Contest, organised by the Modern Languages Department.

Each of the 14 Remove language sets prepares a song in the language they are studying and performs it to pupils and beaks.

As practice of diction and communication it is certainly  a challenge, but fun too: as an opportunity to boost confidence with foreign languages it is hugely beneficial.

The Russianists started the evening off, appropriately, with Privet (Hi), followed by the Italian group with Lasciatemi cantare (Let me sing). The evening followed a varied language programme, with French groups choosing songs by Stromae (Formidable and Alors on danse) and Jean-Jacques Goldman (Je te donne), by ZAZ (Je veux), Amir (J’ai cherché) and Kids United (On écrit sur les murs). The four Spanish groups had also selected an eclectic range, from the delicate Sofia by Alvaro Soler, to the more full-blooded La Bamba by Los Lobos, via Marc Anthony’s Vivir mi vida and the recent Euro football song for the Spanish team, La Roja Baila.

The Germanists took us to the sounds of southern Germany with Rock mi (Voxxclub), complete with shoe slapping, and the Chinese students sang Sorry, my Chinese is not good, by the Bristol-based band Transition. Also performing was the visiting exchange group from our partner school in Paris, Lycée Notre-Dame de Bury, with Riptide, by Vance Joy.

In rounding off a fine evening of foreign language song, the judges awarded third prize to the German group (Rock mi) and joint first prize to the two outstanding performances, the French exchange group (Riptide) and the Spanish song Sofia. Many congratulations to all the Remove on a colourful and upbeat evening of language singing!