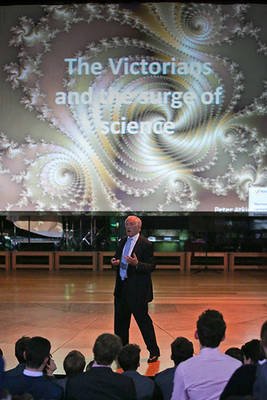 Professor Peter Atkins delivered a lecture on Tuesday 10th May on how scientific discovery in the 19th century led to the world we see today – think of Faraday, Maxwell, Darwin.

It is often forgotten that the Victorian era held some of the greatest scientific discoveries which allowed science to mature into a respected subject.

Through appreciation of the past we can see how science matured and how scientists grew in confidence. The world  today is very much built on the work done in the 19th century.

With a unique presentation style and an emphasis upon development, it was a pleasure to hear from one of the greatest physical chemistry teachers of the last 40 years.

A strong advocate of atheism, it was interesting to know why Prof Atkins holds such strong views. He explained his point of view in an answer to a question on why he believed that religion harms scientific discovery; “Religion quenches aspirations by saying you will never full understand [scientific questions]”.

The debate on science and religion will continue to rage but it was interesting to hear the argument from a prominent scientist.