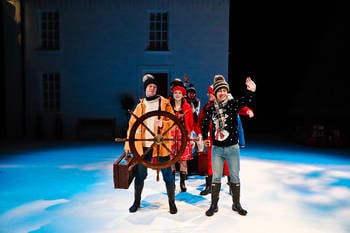 Shakespeare’s delightful topsy-turvy world of Illyria where grief-stricken characters, bereft of siblings and lovers, are presented within a comedic frame was dazzlingly brought to life in David Kenworthy’s production of Twelfth Night.

The warming, goodwill essence of Christmas was somewhat subverted as Santa became the drunken bully Sir Toby Belch, blusteringly played by Max Foulds (SU L6) and dressed in what looked to be remnants of the Punk era. The humiliation of Malvolio was a wonderful team effort involving plotting Snowmen, a very confused Christmas Tree and, of course, the notorious yellow stockings – one laugh led straight to another as the evening unfolded.

A special mention must go to the outstanding performance of Zoe Combe (EL L6) as Viola. To drive the action of the play in the midst of such clowning is no easy task and she did so with great finesse and clarity.

The piece was a hilarious, rebellious frolic, supported by a band whose strident, confrontational timbre was wholeheartedly in keeping with the overall style of the performance.

This was, in every sense, a most exhilarating end to the term.