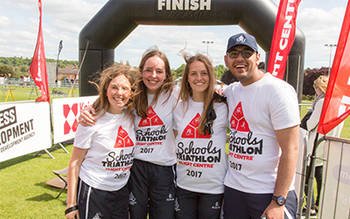 720 children took part in the Flight Centre Schools Triathlon at Marlborough College on Sunday 21st May, to help raise £250,000 for charity.

Restless Development, a youth-led development charity, partnered with leading schools to organise a schools’ triathlon series. The four triathlons took place in April and May with the final one taking place at Marlborough College on Sunday 21st May. More than 2,500 children aged between 7-14 took part in teams of four. In order to take part each child had to raise a minimum of fifty pounds for the charity. The triathlons were sponsored by travel agent, Flight Centre, and the four events raised a combined total of £250,000.

The host schools generously donated use of their facilities to the charity and created the opportunity for hundreds of children to have a fun first introduction to triathlons.

“It was so uplifting to see so many children enjoying swimming, cycling and running around the College,” said Katy Hudson, Director of Sport at Marlborough College.

“The smiles of the teams at the finish line were brilliant.  The whole day had such a buzz of energy, and to find out how much money was raised was just the icing on the cake. We were also very proud of the efforts of our Shell who took part, and of our Lower Sixth volunteers who really made a significant contribution to the day.”

Restless Development partnered with Human Race, a respected mass event organizer, to ensure that the triathlons were organised professionally and safely. For the event to be a success the host school must have the right facilities: an on-site swimming pool, grounds and playing fields for transitions zones and running and cycling route – not forgetting car parking and space for more than 1,000 spectators.

It was just as popular with parents, here’s just one comment: “What a gloriously, wonderful event you managed to put together for the children yesterday. The atmosphere was delightful, with lots of support from parents and fellow competitors, all of which combined to make it feel like a real festival of sport.”

The Flight Centre Schools Triathlon was organised by Jim Sewell, a long time trustee of Restless Development and Tessa Murray (BH 1987-89), a member of the Charity’s Investment Committee. As a father of three, Jim saw a gap for fun, sports based fundraising for children.

They plan to roll out more triathlons around the country. Jim said: “It was brilliant to partner with such great schools and see the children throwing themselves into it. Their efforts will help thousands of children in developing countries access health education and life skills which will transform their lives.

“The children have really understood that they can make a difference, and the combination of sport and charity in a children’s event has been incredibly powerful. I am so excited about the potential for this event – I want this to become the schools’ equivalent of the London Marathon.”

Any school interested in taking part in or hosting a 2018 Restless Triathlon can contact Jim Sewell at jim@restlessdevelopment.org