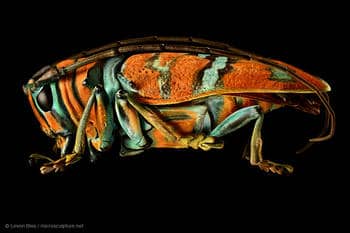 Appealing to a mixture of biology and photography students, he talked about how he ended up taking astonishingly high resolution insect pictures. One of his images, as seen on the microsculpture website, can easily be printed at over nine metres tall and still show no pixellation.

Levon Biss started off his career after graduating from Maidstone, taking sport photographs and portraits. His interest in insects was initiated when his son Seb brought in a beetle from the garden and wanted to see it properly. Levon started to work out how to photograph beetles and other insects in unprecedented detail.
Microsculpture is the study of the texture, shape and design of an insect’s exoskeleton. The structure and shape of an insect can alter the properties of the components which compose it. The beauty in Levon’s work is how he reveals the hidden charming qualities in these creatures. He ensures this by taking thousands of shots to make sure that each of perhaps thirty tiny sections is in focus and lit correctly to highlight the key features. He has pushed the boundaries with modern technology to create these images (www.microsculpture.net) by taking anywhere between 8,000 and 11,000 images per specimen and spending three weeks to produce the images through processing. He emphasises the fact that the skill of photography can be learnt, but it is the creativity and vision of an image which sets the artist, the photographer and the image apart. It is his idea of what he wants the picture to look like, and what to bring out, that makes his photographs different. His skill is highlighted when you consider the extraordinary fact, with modern editing systems, that the photos he produces are not edited to highlight key features. All the striking colours in the insects are brought out by his extensive knowledge of lighting in a specific way.

What made the talk so exciting was how the collection creates an easily accessible and new way of allowing public engagement with the natural world. For example, he makes a beetle look as streamline as a Formula One car. To the entomologist, it offers a new level of analysing and studying beetles without a cumbersome microscope. In his own words, he “makes the ordinary look extraordinary”. To the audience, he certainly showed that following what interests you, instead of what is secure, can often pay off if you have patience and determination. This is why the Levon Biss talk was one of the best and most inspiring the author has seen in her Marlborough career.

To find out more about Levon Biss: The insect portraits visit www.microsculpture.net or watch his TED talk from Vancouver.