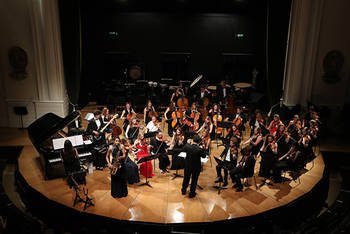 The final large-ensembles concert of the academic year inevitably evokes a combination of joy and sadness. Friday evening’s concert showed exactly that; it was a celebration of the incredible standard of music-making that goes on week in week out at the College, as well as a chance to thank and bid farewell to our departing leading lights.

As is traditional, Brasser began the proceedings under the direction of Alex Arkwright. William Himes’s light and fanciful Caprice contrasted well with the wind orchestra arrangement of Whitacre’s celebrated choral piece Lux Aurumque. Alex Arkwright held the audience spellbound with his elongated pauses between the phrases, and the final a niente was equally mesmerising.

The concluding performances in the concert were from the Symphony Orchestra, conducted by Philip Dukes. As befitted the warmth of the evening, the programme was light and refreshing, beginning with two works by the eminent American composer Leroy Anderson: Serenata and Blue Tango. In Johann Strauss’s Emperor Waltzes, the orchestra really flexed its muscles, with some powerful crescendos and intricate rhythmic work.

Central in the programme was a chance to celebrate two of our outgoing music scholars, Jonathan Venn (C3 U6) and Georgia Gibson (EL U6). Accompanied by the Chamber Orchestra, directed by Hector Scott, Jonathan dazzled and soared in Albinoni’s Concerto for oboe and strings, op. 9, no. 2. The slow second movement was particularly beautiful, demonstrating a musical lyricism beyond his years, alongside superlative breath control. Georgia, accompanied by both strings and the jazz ensemble, allowed us, the audience, to really let our hair down as we enjoyed her virtuosic renditions of jazz standards. In arrangements by Ed Puddick, lifted straight out of 1930s Hollywood, Hoagy Carmichael’s The nearness of you, neatly segue-ing into Cole Porter’s Easy to love gave Georgia freedom to display the full range of colour and technique on both the tenor and alto saxes.

The performances of these two musicians tonight embodied everything great about music at Marlborough: a platform for individuals to shine within the context of supreme collaboration (with 80 pupils involved throughout the evening); expert displays of musicianship by those at the peak of their school career; opportunities for involvement at the highest standard from pupils in all year groups. Friday night’s concert was a fine representation of what we as a school try to achieve. We will miss our leavers terribly, but they can leave proud in the knowledge that they have provided a great example and huge inspiration to the succeeding generations.