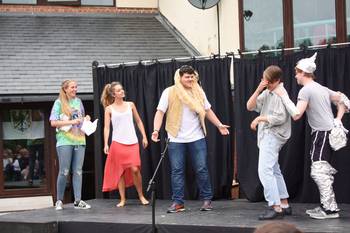 With an air of eager expectation, a crowd of pupils and beaks gathered in the open air Languages theatre on Monday evening for this year’s Lower Sixth Modern Languages Festival.

With all our eight languages represented we were once again looking forward to a celebration of spoken foreign languages by the rising star linguists. We were not disappointed!

The evening started with the Russianists performing an adaptation of the Proclaimers classic song “500 miles”, followed by the Spanish group with an entertaining high speed condensation of Almodóvar’s film “Todo sobre mi madre”. The first of the German sets performed a clever adaptation of a “Blind Date”, and the first of the Lower Sixth French sets continued the TV theme with a hilarious French version of the show “Just Tattoo of Us!”. The Chinese set performed a splendid adaptation by Katya Yan (MO) of the tale of Hua Mulan, complete with martial arts demonstrations and bows and arrows. Our visiting French Exchange pupils from Lycée Notre-Dame de Bury performed (in English) a modern day version of Shakespeare’s Romeo and Juliet, this time set in Las Vegas, and this was followed by two recitations of poetry, firstly in Japanese by Chris Kirkwood (C3) and secondly in Arabic by Freddie Boase (CO). More French followed, with a Harry Potter scene to celebrate the 20th anniversary of the first novel, and the evening continued with the second German set performing a modern adaptation of the famous Grimms’ fairy tale “Hänsel und Gretel”, and the third French set with their own version of “Le Magicien d’Oz”. To round off the evening the Italian set paid tribute to their country’s musical tradition by teaching the audience the 1950s classic “Volare”, which wafted into the summer night.

The judges praised all the performers on their spirit of fun and inventiveness, and on the confidence with which they conveyed the messages of all the entries. First prize was awarded to the Germanists with “Hänsel und Gretel”, with “Just Tattoo of Us!” second, and “Todo sobre mi madre” in third place.

We rounded off an excellent Lower Sixth year in languages with a celebratory barbecue for all the Lower Sixth modern linguists. Many congratulations to all on a excellent and hugely entertaining evening