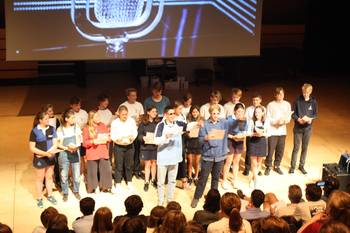 The whole Remove gathered in excitement in the Ellis Theatre on Tuesday evening for this year’s Eurovision Song Contest, organized by the Modern Languages Department.

Each of the 14 Remove language sets prepares a song in the language they are studying and performs it to an audience of pupils and beaks.

This year the Russianists started the evening, greeting everyone with the song Privet (Hi), followed by one of the Spanish sets with Chiquitita. The evening included a range of French songs by Plastic Bertrand (Ça plane pour moi), Helmut Fritz (Ça m’énerve), Ben L’Oncle Soul (Soulman), Louane (Jour 1) and Téléphone (Ça c’est vraiment toi), together with the haunting song “Vois sur ton chemin” from the film Les Choristes. The other Spanish groups had also selected a great range of modern songs, from Al Partir by Nino Bravo to the delicate Sofia (Alvaro Soler) and the exuberant finale Vamos a la playa (Miranda).

Rounding off a great evening of foreign language song, the judges awarded third place to the French exchange group (Yesterday), second to the German set (Hulapalu) and first place this year to the Chinese song. Many congratulations to all the Remove on a colourful and exuberant evening of language singing!