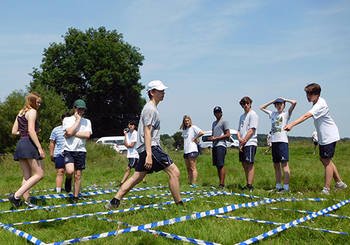 Following the completion of the final GCSE exams, around 50 pupils returned to school to engage in the Incrementum course which focused on developing skills to aid the transition from the Lower School to the Upper School.

On Monday, we gathered in the Ellis Theatre to go through the logistics of the week and outline what our goals were for the week, both on a personal level and as a group. We then took part in a Prism Brain Mapping test which involved responding to varying scenarios so as to give a personal profile of ourselves and established the basis for the activities on Thursday.

Results from Jung’s Personality Test were used to establish the groups for the week (based on countries) with the aim of moving away from Lower School tried & tested groupings. This was followed by the careful deliberation required for the NASA challenge which taught us the value of attentive listening. Sporting Activities later on in the day provided the opportunity to get to know our peers whom we otherwise might not have interacted with before. Later that evening we were shown examples of interviews of which the close analysis helped us to decipher the pitfalls and strengths of interview technique.

The next day, after being divided into four groups, we began a series of activities which included raft building and a library challenge. These activities were a central part in our development of team skills during the week, as they encouraged us to communicate effectively and openly, both with the staff and to the pupils around us. Summer Madness in the evening involved football and volleyball matches between the four groups and summarised the sense of enjoyment and teamwork that had been cultivated throughout the day.

On Wednesday we travelled to Brimslade Farm where we participated in a circuit of activities ranging from blind navigation to sorting skittles by colour. The culmination of the day proved to be the stretcher-carrying race which incorporated a memory challenge that tested physical strength, memory as well as our ability to work together. It was great to see everyone take on their own role in each group by applying their strengths to achieve the best time. Similarly, the pupils and accompanying staff must be commended on enduring the high temperatures that day with positivity.

The following day the external company, Team Thinking, gave us an overview of the results of the questionnaire we completed for them on Monday which allowed for a growth of self-awareness as well as a better understanding of our peers. Challenges throughout the day illustrated the techniques regarding listening and communication that we later improved upon with the help of the vast experience brought by Team Thinking. The Scottish Reeling in the evening, led by Mr Finlay, proved equally unfamiliar to many as well as highly entertaining and fun.

On the final morning, we were visited by Nigel Revell, who taught us practical presentation techniques regarding voice, tone and body language. The peer assessment activity that concluded the session was insightful and the development of the group’s skills improved noticeably since the beginning of the day. Afterwards, Dr Hamilton gave a few words of encouragement and advice in looking forward to the Sixth Form to bring the week to a close.

Overall the week was immensely enjoyable due to the extensive amount of work put in by Mr Finlay and Mr Hodgson without whom none of which would be possible.