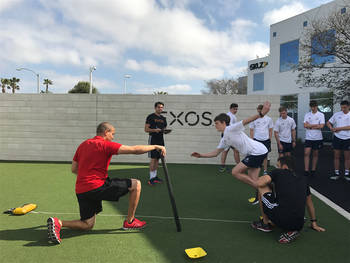 A group of pupils recently travelled to California for a sports performance tour. The tour took in the sights as well as offering pupils access to elite training facilities.

James Davies, Lead Strength and Conditioning Coach, looks back on the trip with a diary of what was a busy schedule of learning and leisure time.

Excitement around the group as we met up at Marlborough before boarding the flight from London Heathrow to Los Angeles.

With jet leg still present, both students and staff had an early wake-up call and indulged in an American style breakfast – waffles, fruit loops and chocolate sauce! We then headed down to the Mexican border for a gift buying opportunity at Las America. The afternoon was spent in downtown San Diego at the Gas Lamp district where we had an evening meal out and visited the Naval Port.

A day out down to world famous Laguna Beach in Orange County – we played some volleyball on the beach. We then headed down to Dana-Point where Peter Burberry – – a local contact – brought us down his paddleboards for the pupils to use. We then had a beach BBQ to unwind after an energetic day.

The first day at EXOS included functional movement screening, physical analysis and nutrition. The session started with a tour of the facility from their coach for the week ‘Roy Holmes’ (@coach_holmes internationally recognised, working with olympic and world class athletes). Straightaway, pupils were engaged upon hearing the American accent and the impressive facilities that had a number of professional athletes already in training.

First up was athlete evaluation, getting an understanding of where the pupils are at currently by assessing a number of different performance indicators. This led us into lunch, where each tour member had a performance meal pack that was specifically designed to give them the relevant energy to get them through the day’s activities.

After lunch, they had a talk on Nutrition from Performance Nutritionist Denise Alvey on the foundations of nutrition, the biggest takeaway being ‘Food First’. The day rounded out with some regeneration work in the cold and hot tubs. That evening we headed down to world famous surf spot trestles and had an evening meal at a Hapa’s featuring a Hawaiian Asian inspired menu.

Another busy day at EXOS with the team of coaches focusing on movement preparation and multi-directional speed.

The focus of the day was looking at numerous recovery strategies to help accelerate recovery, reduce injury risk and improve soft tissue quality to improve performance. It also involved some fun games along with the pupils learning how to throw and catch an NFL football. That evening we headed down to Nakoa Fit where Ryan Gallop, Performance Director, and internationally recognised Performance coach spend 45 minutes educating our group on injury strategies to help prevent knee injuries. That evening we ate at Phil’s BBQ, where they had beef ribs, pulled pork and burgers. Certainly a group favourite!

The pupils were refreshed after a day of regeneration, and eager to take on another two days of learning and development. With some great lectures and practicals, focusing on running mechanics and movement deficiencies, the pupils were then put through a number of competitive drills, identical to the other elite athletes that were training there. The Friday concluded with an analysis of their screening data and a question and answer session on topics covered throughout the week.

I would just like to thank all the staff at EXOS, especially Coach Holmes and Coach Lucas for all their hard work over the five days. A once in a lifetime opportunity for our pupils.

Exploring the sets where Hollywood A-listers have made some of the best blockbuster movies. Highlight of the day, Mrs Hudson overcoming her fear on the roller coaster that she thought was very small, turned out to be the biggest ride at the park!

This was a wonderful, chilled out day after a long week. We rented some surf and body-boards and spent the day down Carlsbad beach. The pupils spent the afternoon out on the water, exploring the town and playing volleyball with the locals.

The last day led us down to world famous Venice beach, where we explored the shops and some of the landmarks; Muscle Beach and Santa Monica. After some ice creams and last bit of sunshine, we returned the mini-van and made our way back to LAX for the flight home after a memorable trip.