It was another busy term for our pupils, and, for almost five hundred, the focus was on the public exams. The exam season, which began in early May and lasted a full seven weeks, yielded a total of 5,661 exam scripts; each one represented the culmination of hundreds of hours of hard work – in lessons, in the library, in boarding houses, at home. Regardless of the looming results’ news in August, our candidates should be proud: both exam year-groups rose to the challenge with purposeful positivity, and deserve to do well.

Despite the necessary distraction of public exams, this term, like any other, was marked by academic activities and achievements beyond the exam boards’ syllabuses. At Commemoration and Prize Day, a total of 291 College prizes were awarded to pupils across all year-groups; of these, two thirds were for academic achievement and effort (the remaining third awarded for sport, music, drama, CCF, leadership, Chapel and outdoor activities). The range, variety and richness of the academic prizes provided a good representation of the academic life of the College – both within the classroom and beyond – and served to highlight the qualities that we value. Pupils were awarded for being curious, inquiring, hard-working, and creative, and for thinking beyond the curriculum.

There were a number of important competitions this term, both within College and beyond. Claudie Granger (IH) and Millie Lewthwaite-Page (CO) produced excellent extended essays for the Newnham College Biological Sciences Essay Prize 2019, and Jessica Reeve (NC) entered the inaugural 2019 Winston Churchill Sixth Form Economics Prize, in which contestants were required to predict, with justification, the Euro-Sterling exchange rate on 1st June 2019. To her pride and delight, hers was the winning entry.

Closer to home, the second Annual Welchman Prize (named after Gordon Welchman, an OM who lead Hut Six at Bletchley Park during WW2) attracted a number of fascinating extended essays written by Further Mathematicians in the Lower Sixth. The culmination of the competition was a programme of presentations, from The Prosecutor’s Fallacy to the Banach-Tarski Paradox, given by the four finalists: Jessica Reeve (NC), James Ruddell (C3), Cyriaque Genest (C3) and Elizabeth Tan (CO). The competition was won by James Ruddell, with an exploration of infinity.

In June, the nine Lower Sixth participants of the Engineering Education Scheme project attended the final at Bath University; Charlotte Bamforth (NC), Edward Robinson (B1), Elizabeth Tan (CO), and Henry Bagshaw (B1), working with On Semiconductors to design and develop a “smart” bin that automatically sorts recycling, were delighted to be awarded the 2019 Airbus Award for Innovation. A tremendous achievement.

From innovation in the Upper School to innovation in the Lower School: on the last Sunday of term, a number of lucky Shell pupils took part in the SHiFT Innovation Lab, led by Mr Kleinman Phillips, Professor Owen Foster (Savannah College of Art and Design, and Director and co-founder of SHiFT), and visiting teachers from partner schools. It was a day of outdoor physical, mental and practical problem-solving challenges, talks and discussions, that took place on top of (and, for two of the tasks, up the side of) the neolithic mound at the centre of College.

Over the next two days, they were joined by the rest of their year-group for the Shell Form Festival, which comprised a wonderful variety of interesting and difficult project-based activities, including a film-in-a-day challenge (special mention to a very chilling Woman in White), a mural art project, jazz/classical/cross-over music recording, steam-punk costume design, a detailed introduction to psychology, a project to design and draw large-scale outdoor anamorphic optical illusions, a workshop of problem-solving challenges (with thanks, again, to Professor Owen Foster), a trip to Winchester Science Centre and Planetarium, and a trip to Sky News and Sky Sports Studios.

These weren’t the only trips this term. For the Modern Languages Department, there were two trips for Lower School pupils of Chinese: one to London’s Victoria & Albert Museum to visit The Chinese Room, and a second to Goldsmiths Confucius Institute for Dance and Performance for an introduction to Chinese martial arts. A team of Lower Sixth linguists visited Cheam School to deliver a day of language taster sessions: Arabic with Jazi Castleman (MO) and Kiyomi Hanson (DA), German with Eve James (IH) and Holly Smith (EL), Italian with Eliza Grant (MM) and Esther Lambert (SU), Mandarin with Mimi Green (MM) and Sam Holden (CO), Russian with Lena Barton (MM) and Charlie Jobson (SU) and Spanish with Nicole Egerova (EL), Eliane Enge (PR) and Daisy Pilkington (SU).

For those studying Art and Art History, there was a trip to the Royal Academy Summer Exhibition (featuring a work by the Art Department’s Ray Ward: About to Get Up Again), and a trip to the Ashmolean Museum in Oxford and Blenheim Palace in Woodstock. There was a Classics Department trip for the Upper Sixth to Odysseus, the Epic Hero at Godolphin School, Salisbury, a Creative Writing Lower Sixth trip to Bath Spa University, a History Department trip to Chalke Valley Festival, a Politics Department Lower Sixth trip to Parliament and the Supreme Court, and a Lower School academic scholars’ trip to the Foreign Office.

The Upper School academic scholars staged a “perambulatory conference” in Bristol – a sequence of site-specific presentations of local interest, covering history, art, literature, music, politics, geography and economics. Talks included Giocomo Prideaux (TU) on the art and architecture of St Mary’s, Redcliffe (from within the building), Poppy Cripwell (MM) on Bristol industry in the early 19th century (at Brunel’s floating harbour), Ben Place (C1) on the structural design of Clifton Suspension Bridge (next to the bridge), Jessica Reeve (NC) on local-born Banksy (next to one of his several artworks in Bristol), and Elysia Rougier (MO) on the bombing of Bristol during World War II (outside Christmas Steps – a rare area of the city that survived undamaged).

When not roaming the streets of Bristol, the Sixth Form scholars produced and edited the latest issue of their publication Inspire, a compilation of thoughtful, engaging and scholarly essays and reviews on a wide range of subjects – humanities, the arts, literature, science, travel, and much more.

Aside from producing Polyglot, the Languages Department have had a busy term of cultural enrichment. In April (somewhat confusingly…), the Upper School Germanists hosted the Tanz in den Mai, an evening of Viennese Ballroom and Disco Fox. There were two evenings of cultural performance hosted by the department – the Remove Eurovision (special congratulations to Mr Lane’s Spanish Set 1A for winning with their convincing rendition of Shakira’s Waka Waka), and the Lower Sixth MFL Drama Festival. First place went to those studying Chinese (with Love Island in China), second place went to Spanish Set A (with Falsos Amigos), and third place went to those studying Italian (with Pulcinella mendicante e disperato).

All 19 linguists were successful in the B1 level DELF (a French certificate for advance linguists in the Hundred) – special congratulations, for breaking the previous top-score record, go to Louise Dessalles (B1) with 99% and Alina Dinckok (EL) with 96.5%. The B2 German Goethe Zertifikat brought similar success for Benedict Eisenhardt (C2), Henry Macpherson-Petermann (C2), Eve James (IH), and Holly Smith (EL).

We have enjoyed a number of Art and Photography exhibitions this term, hosted by pupils and staff. Special mention should go to the GCSE and A level exam-year pupils, who curated exhibitions of their coursework on Prize Day in the Mount House gallery and the Art Department. Mr Twohig described the pupils’ work in the Mount House gallery as “fearless”. Another highlight in this term’s exhibition programme was that of the Artist-in-Residence, Siobhán Humston. Akin Uncountable included sculptures, a stop-motion film, and a number of large-scale drawings. The arresting centre-piece was an ethically-stuffed pigeon, wings akimbo, rising gloriously above a lattice of ceramic branches.

From pigeon to bustard… There were a number of excellent talks this term to nurture pupils’ interest and enthusiasm, including a talk for the Biology and Natural History Society Talk, The Reintroduction of the Great Bustard to Wiltshire, given by David Waters (director of a local conservation charity), and a talk for the Lower Sixth Further Mathematicians on Game Theory, given by Dr Paddy Wallace. Mr Elton, Head of Maths, described Dr Wallace’s talk as “a super-curricular highlight – engaging and highly interactive”. Further talks included Professor Mike Cruise (President of the Royal Astronomical Society) with The Gravitational Sky, Professor Giuliana Pieri (Royal Holloway) on Italian Crime Fiction, Max Stafford (for the Politics Society) with Prime Minister – a U.K. President?, and a Venetian double-bill: Dr Gabriele Neher (University of Nottingham) on Venetian art, and Mr Blossom with How Venice made the world’s most unlikely empire.

To our recent leavers: good luck and keep in touch. 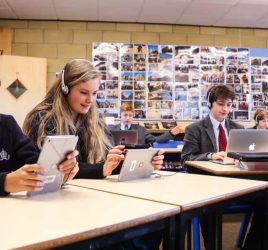