Thirty-two of the College’s Upper-Sixth History of Art students enjoyed six wonderful days in Italy this half-term touring sites of prime art historical and scholarly interest. The party was based in Rome but ventured out to Arezzo, Orvieto, Naples and Pompeii. That way, students had detailed exposure to the curricular material we study on the Roman Baroque course, but were also afforded glimpses of beautiful, imposing, and moving things in other regions and from other time periods.

The itinerary began as soon as we were clear of the necessary business of planes, transfer coaches, and room keys. For a taste of the urban underbelly beloved of Caravaggio, we picked our way through the poor district behind Termini to S. Bibiana, a fourth-century church with an oddly proportioned façade by Bernini, his first architectural commission, and with interior frescos by Cortona, his first such large-scale decorative commission. Since these men were to feature prominently throughout the week, it was good to see their humble professional beginnings in this small church, and to experience it after dark during evening prayers. Such conditions provided the desired contrast to the sparkling magnificence of Palazzo Colonna first thing on Saturday morning. The old trick of asking to enter the Gran Salone from the side street worked once more: the students were astonished by the sudden dazzle of gold, mirrors, crystal, marble, frescoed barrel vault, etc. A short walk up the hill took us into S. Andrea al Quirinale, the last of Bernini’s churches, and to Borromini’s S. Carlo alle Quattro Fontane, from which Bernini drew inspiration. That church was a hit with the students; they loved its monochromatic restraint, formal exuberance, and utter originality. Borromini had been recommended for the commission by Urban VIII, Maffeo Barberini, so the morning was rounded off by a visit to his splendid Palazzo with Cortona’s enormous ceiling showing the apotheosis of Barberini to papal power. The afternoon’s programme took us to the Capitoline and the museum with many pictures by Guercino, Reni, Vouet, Caravaggio, et al, and the Etruscan She-Wolf, before visiting the Jesuits in Il Gesù. It was genuinely interesting to see how the architecture and full Baroque scenography played upon the students’ emotions: some were disconcerted by it, others were on the brink of tears. It struck me that either the Jesuit artists or Marlborough College had done something right in the cultivation of spiritual sensibilities. The evening was spent in Piazza Navona and environs, before a slow walk back to the hotel. We had covered 21 kilometres according to someone’s FitBit.

The next day began early with a 07.28 train, a bit rough for the first Sunday of half-term, but at least its destination was the exquisite Tuscan hill-town of Arezzo. After coffee and cake amidst the Sunday market, we visited Casa Vasari, the house where Giorgio Vasari lived and wrote much of his famous Lives. It was good to see his own frescos in such an intimate setting, and to sit in the garden with his fountain tinkling into its marble basin. Some students forewent a longer lunch to see the Piero della Francesca frescoes in the S. Francesco Basilica. From Arezzo, we took the train to Umbria, and up the funicular to Orvieto. For many, this was the highlight of the trip, with its towering Gothic striped cathedral, its dynamic Mochi Annunciation, and above all, its terrifying Last Judgement by Signorelli. It was moving to sit in a space lit with golden light from its alabaster windows gleaming off the marble floor, and to see such vivid spectacles all round.

Orvieto’s repose and tranquillity gave way to the stress and struggle of Naples the next day. We were taken by an agitated and muttering Roman coach driver who obviously loathed driving in Partenope, though he did manage to deliver us to the top of one of the city’s hills to visit the Museo di Capodimonte. To add to the general air of disorder, the authorities have now directed the flight-path of inbound planes over the roof of the museum. This made for the viscerally thrilling experience of talking about Titian and Caravaggio while sky-darkening aircraft, under-carriage lowered, skimmed the roof overhead. More mayhem followed in trying to find the right entrance for groups at Pompeii, but once everything was in order, the students had reflective time amongst the numinous streets and houses of that special place, and many were properly moved by it all.

On Tuesday the programme returned to Rome, and another early start with 08.00 entrance to the Vatican Museums. We spent the morning and first part of the afternoon in the Pinacoteca, the Sistine Chapel, and the Basilica, with special attention in the latter paid to Bernini’s decorative programmes. Three days earlier, Cardinal Newman had been canonised, and a banner with his face hung from Maderno’s western façade. Back across the Tiber for the last part of the afternoon, we visited important Caravaggio chapels at S. Luigi dei Francesi and S. Agostino, Borromini’s S. Ivo, and the Pantheon. Mid evening, the skies opened, and we were caught up in a ferocious downpour with dramatic sheet lightning, arriving back at the hotel sopping wet. Our shoes hadn’t dried fully overnight, so some students took measures of wearing hotel hairnets over their socks. It seemed to serve them well, as we took in our last three sites of the trip, Villa Farnesina, Palazzo Corsini, and the Ecstasy of St Teresa at S. Maria della Vittoria. The Farnesina visit was particularly good, as Il Sodoma’s ‘Marriage of Alexander and Roxane’ was still viewable, despite being earmarked for restoration. Moreover, there was a fantastic exhibition of works by Leonardo and his studio, and it was pleasing to observe students open-mouthed at Leonardo’s drawings, and to see them have such close access to a Mona Lisa and a Salvator Mundi copied in the early 1500s from the originals under Leonardo’s supervision. First thing in that morning, a detachment of students had travelled to St Peter’s Square to attend the papal audience, and all concerned came back with a beatific glow – and some great photographs. This placed a proper seal upon a wholly satisfactory trip, full to the brim of sights, colours, spectacles, and experiences likely to sustain our senior art historians as the dark days of autumn settle in around us. 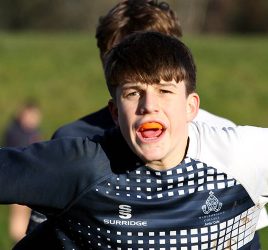 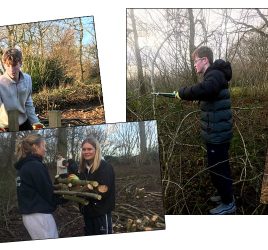 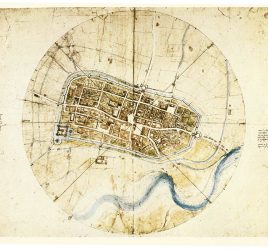