On the afternoon of Tuesday 4th February 2020, seven school teams gathered at the College to take part in the Joutes Oratoires (a nationwide schools’ French debating competition). After a fierce battle against St John’s School, debating, perhaps ironically, whether violence can ever be justified, Annabel Hannan (NC U6) and Grisha Belotserkovsky (TU U6) emerged victorious. They will head to London in March for the national final at the Institut Français.

The Joutes Oratoires debating competition is an example of the many collaborations with, or against, other schools; from a European Day of Languages Quiz with local prep and primary schools to a Translation Duel as part of the Marlborough Literature Festival. And, of course, there are multiple overseas exchange programmes: with Fudan Academic in Shanghai, with No 8 High School in Beijing, with Lycée Jules Verne in Limours, with Collège-Lycée Notre Dame de Bury in Paris, with Realschule Gute Aenger II in Freising, with Lycée Vauban in Luxembourg, and with Colegio Peleteiro in Santiago de Compostela. It is an astonishing list of partnerships, adding so much to pupils’ linguistic and cultural development.

Partnership beyond the College and within. Many of the activities of the department cross over into other areas; the Advent Evening and the Liederabend are two good examples. The Advent Evening is a meditative sequence of Advent-themed readings, interspersed with songs. This year, 11 languages were spoken: the nine taught by the department, plus English (does that count?), and, thanks to The Revd Dr Blokland, Dutch. The communion of music and words is further celebrated by the annual Liederabend, which this year included the premier of Timon Staehler’s (C2 U6) setting of Heinrich Heine’s poem Altes Lied, performed by the composer and Mrs Toomer.

Scholarship defines the department, from the regular pupil-led meetings of the society Les Amis de Maupassant through to the department’s magazine, Polyglot. Pupils take part in the Linguistics Olympiad at junior, intermediate and senior level, and enter national essay competitions (recently, the Anthony Cross Essay Prize for Russian and the National Russian Essay Competition). And, so, it is no surprise that such a number choose to read languages at university: there are currently 74 OMs studying for a foreign language degree in some form. Of these, 12 are at Oxford or Cambridge, with a further three with conditional offers for October 2020: Annabel Hannan (NC U6, Somerville, Oxford – French and Linguistics), Peps Haydn Taylor (NC U6, New College, Oxford – French and Italian), and Eve James (IH U6, King’s, Cambridge – Linguistics). Lena Barton (MM U6) has a place to read Slavic Languages and Literature at Princeton University.

However, without cake there can be no icing: the core business of the department is the week in, week out teaching, and, to that end, the department is unrivalled. Six languages are offered in the mainstream timetable (in preparation for GCSE in the Lower School and A level in the Upper School): French, German, Italian, Mandarin Chinese, Russian and Spanish. These languages are also offered in the Lower Sixth, either ab initio or as a continuation from GCSE, as part of the Sixth Form programme of enrichment: GCSE for Italian and Mandarin Chinese, the Diplôme d’études en langue française (DELF) for French, the A2/B1 Diploma Español como Lengua Extranjera (DELE), and the B1 Goethe Zertifikat for German.

Since the 1980s, the department has developed a reputation for championing the teaching of languages that would not normally be taught in UK secondary schools. The Schools’ Arabic Project led the way (a number of pupils sign up each year to study for the Marlborough Certificate in Arabic), soon to be followed by the introduction of Japanese (leading, again, to a Marlborough Certificate). The latest exciting development is the introduction of Hebrew, which has been made possible by the generosity of Eugene Shvidler (father of Anna Shvidler (DA Re)). We are fortunate to have Ms Osnat Boo preparing our very first cohort of Hebrew learners (comprising Lydia Bennett (DA U6) and Tegen Dixon-Clarke (DA U6)) for the newly-created Marlborough Certificate in Hebrew. Exciting times.

And sad times, too. Having served the department since 1981, we say goodbye to Andrew Brown at the end of the academic year. During his 39 years of service, he has assumed a number of senior roles within the College: OC CCF, Housemaster, Director of Professional Development, Head of French, and, most recently, Head of Modern Languages. But, above all, he will be remembered for his teaching: for his encouragement and for his inspiration, and for passing on his love of literature and language to generations of grateful Marlburians.

We raise a glass to the Modern Languages Department: to Andrew, to his talented and hard-working team of teachers, and to those who provide invaluable one-to-one support: les assistantes, die Assistentin, le assistenti, 口语助教, ассистенты, y los asistentes. 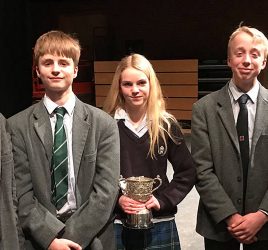 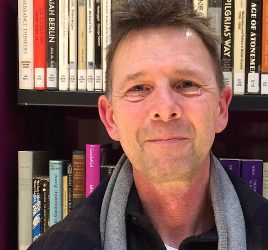