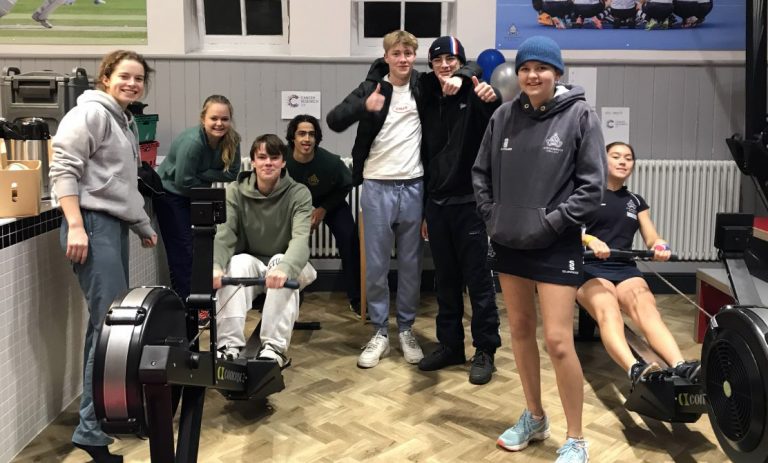 There have been a host of charitable ventures this term, some school-wide, some driven by houses, and some in response to very specific events highlighting areas of need.

The total raised by all these wonderful initiatives is close to £50,000 which is a truly remarkable amount.

Mental health has been at the forefront of our thinking both individually and collectively. We all faced early in the term the very sad news of the passing of Oliver C (CO 2019–21). His memorial fund in aid of Mind has raised over £25,000. The Green Ribbon campaign for Mind, led by Isabella T (U6) and Harry C-W (U6), on World Mental Health Day raised a further £1,225. In November, B1 took part in a mini triathlon – in teams of four, the boys were challenged to collectively cover a swim distance of 1.2km, cycle 20km on a Wattbike and to run 6km – supporting each other through their respective strengths and weaknesses and raising £2,000 in the process for Young Minds, a UK-based charity that endeavours to make sure that all young people can get the mental health support they need.

There have been many other Herculean physical challenges completed as part of fundraising endeavours. Ophelia L (U6) raised over £800 for the Marine Conservation Society by walking over 143 miles in ten days. Fifteen Lower Sixth pupils led by Hannah K and 12 members of Common Room combined forces to complete a 24-hour sponsored row in aid of Cancer Research completing 466km between them and raising over £12,000. The 24-hour tennis marathon raised over £3,000 for Bright Ideas for Tennis and the annual Mill Mead and C3 5km poppy run raised almost £4,000 for the Royal British Legion.

In the Art school, 1,425 Euro was raised for Verso Art, an Irish charitable initiative, where our pupils and Art teachers donated work for an online exhibition to support conservation work at Lismore Cathedral in County Waterford, Ireland.

£5,000 has been raised for the Refugee Council, a UK-based charity who work to support Afghan refugees in the UK, in addition to the collection of much-needed backpacks and practical supplies. A further £7,000 was raised via the retiring collections at our recent Carol Services and this will be divided between the Refugee Council, Alport UK, Ace Africa and the Anti-Slavery Collective. Christmas jumper day and the sale of candy canes raised a further £700 for Cancer Research and Movember.

These are superb efforts and we extend our grateful thanks to everyone who led activities, participated in them or supported and gave money. Marlborough has a rich philanthropic tradition and we are proud that a sense of giving and of looking to make a difference within our own community and in the wider world is so strongly felt by our pupil, staff, parent and OM body.