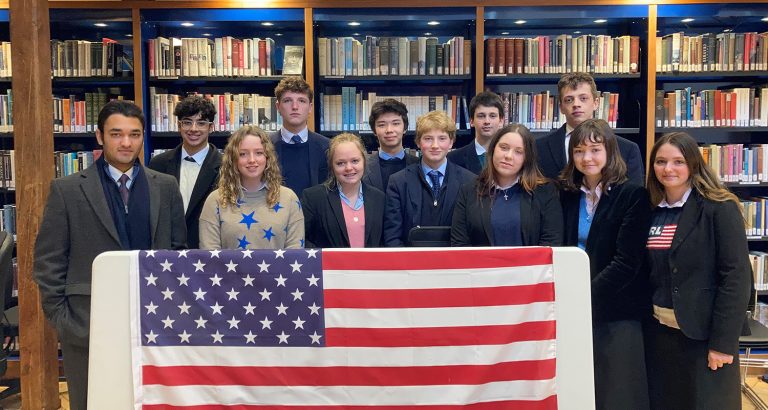 12 of our Lower Sixth pupils took part in a virtual model United Nations event with 14 schools from across the world on the issue of climate change. The event, titled Good COP Bad COP, involved 140 pupils from China, the United Kingdom, Australia, and Ireland, who debated the climate resolutions agreed at the COP26 summit in Glasgow, Scotland last November.

The model UN conference was organised by UK-based educational charity Engage with China, which seeks to build China-literacy and develop global awareness in UK schools. The aim of the event was to enable pupils to develop a greater understanding of what is involved in fighting climate change, and to give schools around the world the opportunity to connect to share varied perspectives on this global issue.

Theresa Booth, a director and trustee of Engage with China, hoped the conference had helped pupils to better understand that “all nations need to collaborate, listen to each other and understand each other’s challenges and specific needs”. She said such understanding is needed “if we are going to have any hope of successfully tackling global climate change, and this applies to other global issues like any future pandemics”.

During the conference, pupils represented countries other than their own, with Marlborough College pupils representing the interests of key climate player, the USA. The format was designed to provide those taking part with an insight into global engagement and negotiation. Before splitting into specific virtual rooms to debate different aspects of climate change, each delegation gave introductions and presentations summarising the views of the nation they were representing.

King’s Hospital School, Dublin, represented Barbados and their delegate said: ‘To countries like Barbados and my home country of Ireland, we live on islands and it becomes very real to watch the sea creep closer and closer every year to your homes and your livelihoods.’ The delegate from Shenzhen Foreign Language School in China, representing Saudi Arabia, said: ‘There are plenty of solutions to climate change… however, the implementation of climate-changing policies is a long-term process and realistically cannot be implemented in one go.’

Our Marlborough College delegate, Bella M, said: ‘Climate change is an underlying threat to all nations, communities and individuals around the world and this is something that whilst not immediately apparent in all places needs urgent address … The very fact that we are here today to debate, evaluate, and reflect on the successes of the international community at COP26 shows hope for the willingness of future influential figures in effecting change and meeting targets.’

Our pupils were supported throughout the event by Richard Willmett from the Politics Department, who said: ‘The event was an excellent opportunity for pupils to engage with others from different cultures and backgrounds on a topic that affects us all. The 12 Marlburians who took part were a great mixture of UK-based and overseas pupils – again enhancing the variety of opinion and experience on offer. Engaging and enjoyable debate was seen on all three of the different resolutions and there were a great number of impressive performances on show from both Marlburians and the other delegations. This was a really positive experience and one which many of those involved are keen to replicate in the future’.