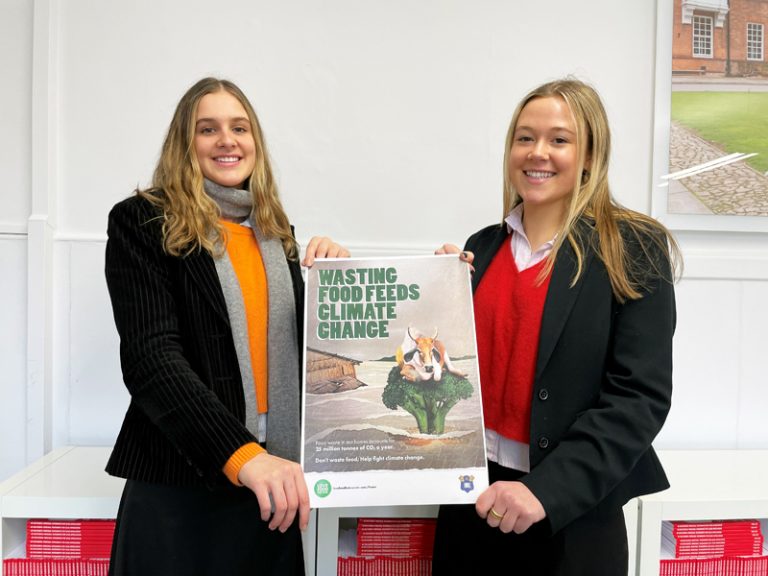 There have been a host of charitable ventures this term, some school wide, some driven by Houses, and others in response to dramatic recent worldwide events.

The total raised by all these wonderful initiatives is £23,809 which is a truly remarkable amount.

Upper Sixth pupils, Celia C and Ophelia K, led a Food Waste Action Week from Friday 4th March which included an innovative charity raffle in aid of the Felix Project, a food redistribution charity that fights both food waste and hunger in London, which raised a fantastic £4,099.

Our Wellbeing Ambassadors raised £370 for National Child Exploitation Awareness Day, selling ‘say something’ wristbands. This amount was kindly doubled by a generous member of Council making £740.
The Summerfield charity day took place on Sunday 6th March and raised a brilliant £4,426 for Alport UK and the Leo Bush Fund. It involved every member of the House and some staff running laps of the College athletics track, by relay, in an attempt to break the men’s world record for a marathon. This was achieved in a collective time of 1 hour, 55 minutes and 24 seconds for a marathon distance of 26 miles and 385 yards.
Elmhurst also put on their running shoes to complete the OX5 (5 mile) run in support of the Oxford Children’s Hospital whose work makes such a difference to thousands of young patients, raising £1,962.
Ivy are raising money for Ace Africa and Mind, and a combination of their extremely popular cake sale and a charity art exhibition and concert took their total this term to £1,130.

Morris raised £225 for Cancer Research UK by selling Valentines carnations and our HM of B1 and his son, Ben A (Re), completed an impressive 10k run for the same important charity raising £2,005.
Charlie K (Hu) continued his family’s longstanding support for Operation Smile, raising £411.

The humanitarian crisis unfolding in Ukraine brought the College community together on Thursday 24th March for a moment of silence and reflection, united in the hope for peace. Pupils have been collecting specific and requested items for Ukrainian refugees over a period of some weeks and these have been accumulating in the Chapel narthex. On Friday, 18th March, a dedicated group of pupil volunteers packed the items into the Drama Van, nearly filling it to capacity. These items were then delivered to a special donation collection point in Swindon by Reverend Novis and Gregor McSkimming, HM of Barton Hill, from where they will be transported to assist refugees in Poland.

Several pupil fundraising initiatives have also been raising money for charities supporting Ukrainian civilians. Cotton have raised £1,920 over the last month for the charity – Sunflower of Peace – a fundraiser producing first aid, medical backpacks for paramedics and doctors on the front lines in Ukraine. Littlefield ran a charity pizzeria raising £400; the pupils and parents of Elmhurst came together to raise £5,429 for Ukraine Aid and the Prefects’ Prom raised £362 for the Disasters and Emergency committee Ukraine appeal.

These are superb efforts and we extend our grateful thanks to everyone who led activities, participated in them or supported and gave money.