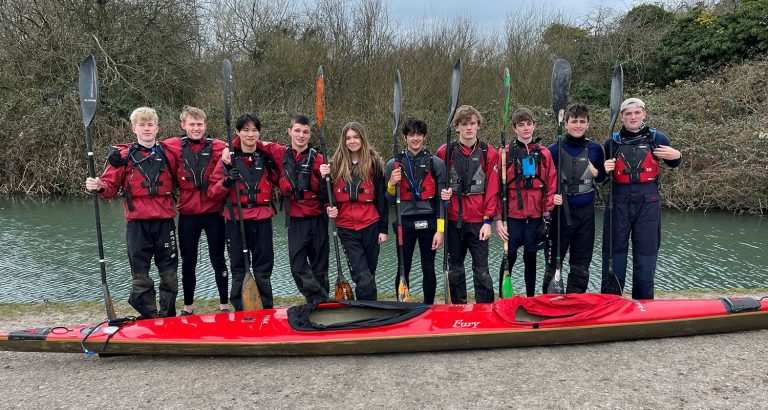 The Easter holiday is traditionally a time of rest or revision for our pupils, depending on their priorities, but for 10 members of the Lower Sixth the Easter just gone meant something rather different and more physically demanding. Easter 2022 saw the return of the Devizes to Westminster Canoe Marathon (or DW), commonly recognised as one of the toughest endurance races in the world, after a two-year hiatus due to COVID.

The course runs from Devizes in Wiltshire along the Kennet & Avon Canal to Reading, where it continues along the River Thames to the finish line at Westminster Bridge, a distance of 125 miles. The Stages Race, which Marlborough pupils participated in, takes place over the four days of the extended Easter weekend with pupils camping at each day’s finish point before setting off along the course again the following day. While COVID restrictions at Westminster Bridge meant that this year’s race was shortened to 108 miles, with a finish point at Teddington in West London on Easter Sunday, our paddlers still had to contend with three consecutive days of over 30 miles of paddling, as well as a total of 77 portages (where the crews lift the boat off the water to run round the many locks which intersperse the course, before getting back on the water to continue).

The five Marlborough crews, paddling two-person racing kayaks, had an intense but rewarding two terms of preparation, beginning in September 2021 as complete novices and progressing and improving as the weeks went by. 2022 also saw the return of the Waterside Race Series, organised by Newbury Canoe Club: a series of four races taking place every fortnight before Easter which is commonly used to prepare for the DW race itself. Our Marlborough crews acquitted themselves very well and won the schools competition for the Series, with our top three boats having the fastest combined time of the schools that entered.

An unfortunate broken ankle for Ned W a week before the race meant that Mr Hamilton, who had been training anyway to complete the race solo, was substituted in last-minute to paddle with Rory C. Day 1 began with an 8am start at Devizes and was a 34-mile paddle to Newbury in ‘home waters’, which the crews had all seen before as part of their training, amid fine warm weather. After a lot of food and a mixed night’s sleep in Newbury, Day 2 was a more challenging affair as the crews covered the 20 miles along the canal to the river Thames, and then on to Marlow for a 37-mile total distance for the day. Then on Easter Sunday, despite aches and tiredness, they powered through the 38 miles downstream from Marlow, all of which was unfamiliar territory for our crews, to the race finish at Teddington. In the end, Marlborough came 5th of the school teams participating.

All the crews did phenomenally well and are to be congratulated on their grit, determination, and willingness to complete such a significant challenge, as well as their support for each other and their good humour and company throughout the months of training. Thanks must go to their friends and family who comprised the paddlers’ support teams. For such a long distance, the crews needed regular ‘pit-stops’ to receive food and drink so that they had enough energy to complete each day. The support crews did a marvellous job in ensuring that each paddler made it through the race safe and well.

The OA Department staff of Russ Tong (Head of OA), Jonny Newman (OA Instructor), and Rebecca Brown (OA Instructor) were instrumental in developing this cohort of paddlers from their early (and rather wet!) attempts at kayaking back in September through to the race itself. They deserve huge thanks for their support of the squad, and for ensuring that, despite the challenges of COVID, Marlborough remained such a prominent part of an event which the College has participated in for many years. Many thanks too to the tireless and hard-working team of organisers, race marshals, and other volunteers at the DW Race organisation who ensured that the race could run in close to normal form this year.

Finally, the pupils did a fantastic job raising money for Mind, a charity which offers mental health support to those in need, with the total amount raised at nearly £9,500 thus far. Any support you can offer this important cause would be greatly appreciated, which can be done by clicking here.

The crews and final times were: