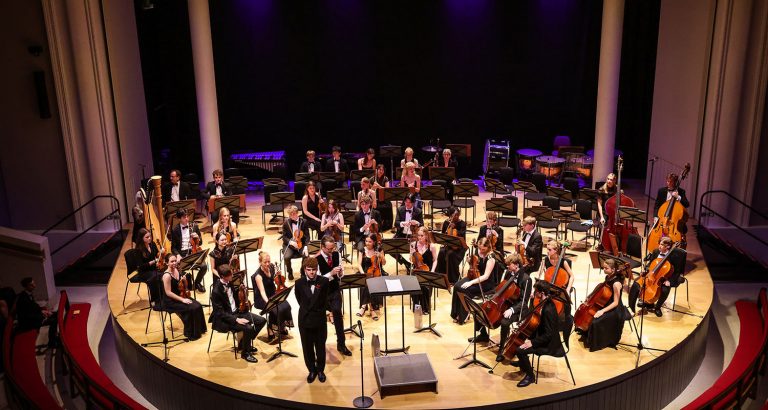 On Friday 20th May, the College Percussion Ensemble, Wind Orchestra, Chamber Orchestra and Symphony Orchestra performed a momentous gala concert. This event is traditionally an opportunity to celebrate the culmination of orchestral concerts and rehearsals, featuring the leaving Upper Sixth Music Scholars.

The evening commenced with a spiky and energetic performance of Dave Mancini’s Fiesta Latina by the Percussion Ensemble, featuring soloist Monty P-P (U6) and directed by Mr Sacha Johnson. This was an impressive and impactful start to the concert, and had the audience keenly engaged from the outset.

Mr Alex Arkwright then took to the podium to conduct the Wind Orchestra (aka Brasser) playing a varied and eclectic programme including a well articulated and spirited rendition of Toccata by Frank Erickson, Down a Country Lane by Aaron Copland and Days of Glory by John Cacavas. The orchestra was led by Bee P (U6).

The evening continued with the Chamber Orchestra conducted by Ms Sara Stagg, and led by Jenny J (U6). The audience were led through the luscious harmony of Edward Elgar with a buoyant and uplifting performance of his Serenade for Strings. Although originally arranged for solo accordion and orchestra, Astor Piazzolla’s Oblivion was skilfully interpreted by violin soloists Timothy P (U6), Jenny J (U6), and Aleksandra B (U6), accompanied of course by the orchestra.

A breath of love

Mozart’s Un’aura Amorosa was brought to life by tenor soloist Ed B (U6), who gave a poised and refined performance subtly accompanied by the Symphony Orchestra.

Send in the Clowns by Stephen Sondheim was an excellent opportunity for baritone soloist Henry D (U6) to serenade the audience with an emotive, characterful, and captivating performance of this all-time classic.

The evening concluded with the Symphony Orchestra, conducted by Mr Philip Dukes performing Camille Saint-Saëns’ Danse Macabre, featuring soloist Jenny J (U6), who managed (somehow) to skilfully exchange quickly between the devil’s violin (tuned down) and her regular instrument.

After having weathered the storm of the pandemic and the challenges made to collaborative music-making that it posed, Marlborough College is once again ‘bursting at the seams’ with musical activity. The pupils’ hard work and dedication during rehearsals over the past year has resulted in numerous impressive and engaging musical performances.

With a hint of sadness for my me and my colleagues in the Music Department, this would be one of the last chances to hear and see the immensely talented Upper Sixth musicians performing together at Marlborough College. This concert was a wonderful opportunity for them to share their considerable talents with the College community through leading their ensembles and playing in several poised, articulate and daring solos. We look forward to the celebrating their success in the weeks ahead and wish them well for their future adventures!