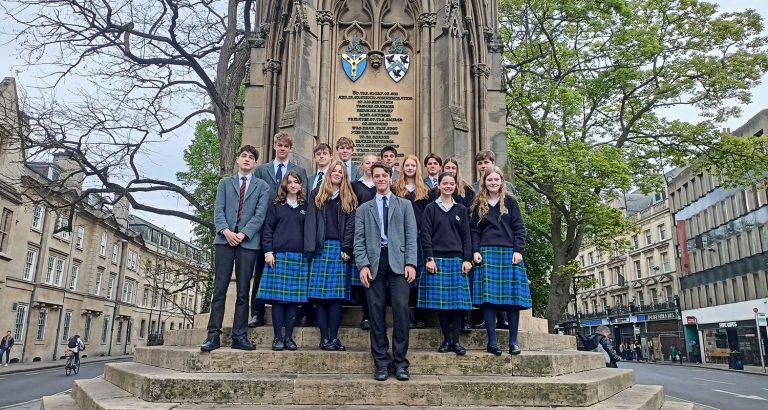 Josh Lynbeck (History beak) gave a tour of Balliol College, his alma mater, explaining to scholars the benefits of the Oxford tutorial system. Nearby, our scholars discovered the cross marked on Broad Street, where Bishops Latimer, Ridley and Cranmer were executed under the reign of Queen Mary. Moving to Blackwell’s Bookshop and the Bodleian Library, the sheer profundity of scholarship and manuscript research amassed in Oxford was made clearer. An exhibition on the discovery of Tutankhamun’s tomb – with manuscripts, sketches and maps from Howard Carter no less – had the air of mysterious discovery, showing our scholars the grander ‘romantic’ side of academic work.

Crossing the street, Remove pupils entered the Divinity School, a masterpiece of medieval masonry and the architectural genius of William Orchard. Of old, theology was taught beneath the lierne vaulting of the ceiling, which perhaps remains unsurpassed in stone wrought carved beauty. In the nearby Vaults and Gardens Café , our scholars lunched with Eva Stuart (MO 2016-21) – who was Head Girl last year – and quizzed her about her first year at Oxford. Eva’s answers were graceful, informative and lifted by the surrounding grandeur of Radcliffe Square.

For the final part of the day, we crossed the Cherwell River to a stalwart Oxford arts venue, St John the Evangelist Church (SJE). The Oxford May Music festival was on, with events linking science, music and the arts. Pupils initially attended a concert featuring leading accordion player James Crabb, with an array of talent supporting. One example of the repertoire was a performance of Vaughan Williams’ piece, Lark Ascending. After a respite at G&D’s (an Oxford staple located nearby), our scholars returned to the SJE venue for an invigorating lecture on black holes and cosmology by Oxford Professor, Katherine Blundell.

The day finished with a group photo at the site where Roger Bannister broke the four-minute mile, before we returned to the gentler climes of Marlborough.

Responses from our pupils

The trip has shown me that these institutions are very open-minded and allow each individual to think for themselves and live their own life.
Ben A

I found the lecture interesting and very informative. It also inspired the idea that we really don’t know as much as we might think. The trip has made me consider going for Oxford as I really like the area and the system of colleges as well as the events we attended.
Freddy W

At Oxford you can broaden your cultural horizons in your free time and discover new music that you would never have heard of previously. The lecture was also very engaging as well as informative. It gave me the impression that studying at Oxford would encourage you to connect with your subjects and to truly understand everything. Mr Lynbeck told us how you could enjoy your academics as well as enjoying co-curricular activities like singing in the choir or playing sport. He feels that it made him endlessly curious and that he is never lost for words as it makes you comfortable talking to all kinds of people.
Lottie J

It makes me really want to have a go at applying for Oxford or Cambridge as even if I didn’t get in, I would learn a lot about myself and most likely about my particular area of interest as well. The benefits of studying at Oxford seem to be overwhelming and it looks like the perfect step for an academic who wants to research further into their subject with proper resources around them.
Elliot R

I have gained a greater interest and knowledge of the universities and especially the college system. Also talking to Eva was helpful as it gave an account of the university from the point of view of someone actually there.
James F