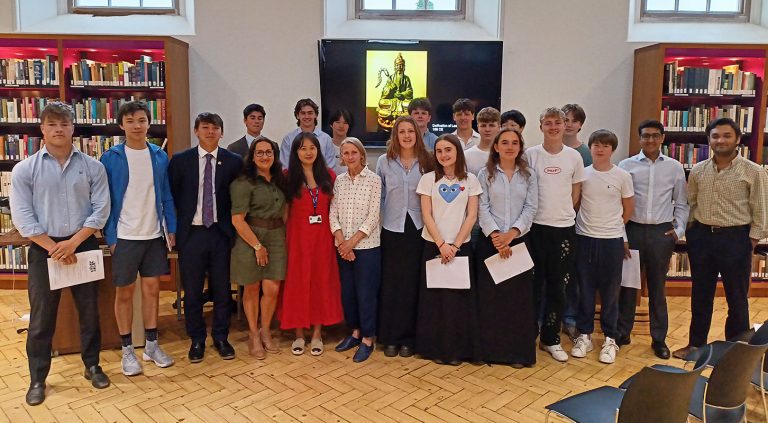 On a lovely sunny Thursday evening (the 16th of June) Scholars & the Philosophy & Asiatic societies, invited speaker Sandra Hill to talk on an Introduction to Chinese Philosophy. Sandra is an expert on Taoism and lectures at the Temenos Academy, London.

Given the breadth of the topic, spanning hundreds of years, Sandra meticulously took us through the cultural history of China before diving into the great thinkers of Chinese Philosophy, leading us from the Xia era (thought to exist from around 2070 B.C.E. until 1600 B.C.E.) to the present-day Han era. We were introduced to important texts such as The Book of Changes by Yi Jing, The Book of Rites by LiJi, and The Analects which are the likely sayings of Confucius.

Another aspect we learnt about was the role of cosmology in China. We were told of the significance of figures such as Fuxi (the founder of the Chinese race and inventor of writing) and his sister and consort Nügua, who divided into Yin and Yang and how their importance carries into various elements of Chinese culture.

The first philosopher we were introduced to was Confucius and we learnt of his desire to create a peaceful and functional society, whereby an individual must take accountability for his or her actions – especially as they relate to the health of the whole community. Sandra told us how Confucian scholars review and study their behaviour and their self-cultivation through study, as they want to make themselves into a more virtuous person.

Conversely, we learnt about Laozi. His teaching encouraged withdrawal from society and to avoid seeking worldly fame. Taoism argued that perhaps Confucian scholars were meddling with society and disrupting its harmony. Nonetheless Laozi stressed experiencing things as they are and tended to downplay rational, cognitive and purely logical thinking. Taoism emphasises harmony with events and patterns – being in and part of the moment – and accepting its reality.

The talk was of great value for Lower Sixth Humanities scholars and for pupils of Philosophy and of Chinese Language looking at the broader implications of their A level courses. As a pupil studying both Philosophy and Chinese, I would like to extend my thanks to Sandra Hill for her insightful assessment of Chinese philosophy and also its re-emerging impact on the modern world.

When heaven and earth were yet unformed all was ascending, flying, diving and delving.
Thus it was called the great inception. The dao began in a nebulous void. The nebulous void produced space-time. Space-time produced the primordial qi. A shoreline divided primordial qi.
That which was pure and bright spread out to form heaven. That which was heavy and turbid congealed to form earth…

‘When Zizhang asked…Confucius said, Courtesy (gong恭), tolerance (kuan寬), trustworthiness (xin信), diligence (min敏) and kindness (hui惠). Be courteous, and you avoid disrespect. Be tolerant, and you win over the multitude. Be trustworthy, and you are trusted by others. Be diligent, and your work will go well. Be kind, and you will be able to employ the others.’