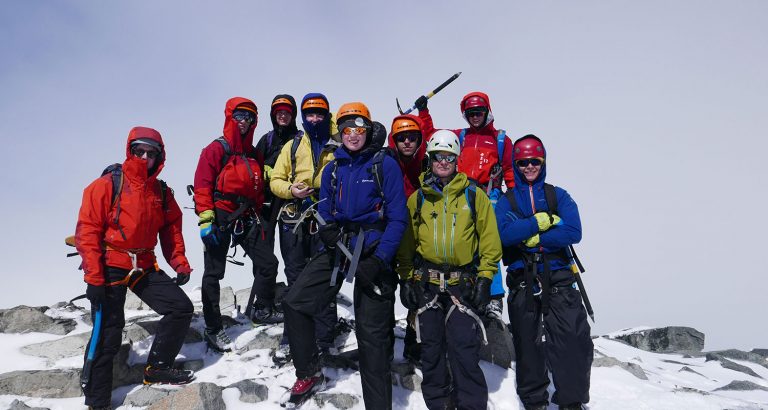 For many the summer break is a time for travel and a host of Marlburians chose the path of adventure by exploring the globe on trips and tours.

In early July, seven Marlburians headed off on a trip to climb Galdhøpiggen, which is the highest mountain in Norway, Scandinavia and Northern Europe. The eight-day trip saw pupils, joined by three members of staff, reach the 2,469m peak in excellent weather conditions.

Before their summit day, the pupils spent a day learning essential mountaineering skills. They practiced walking in crampons, using and carry an ice axe as well as the crevasse rescue skills needed for the journey to the summit the following day. The day of the summit attempt began in cloudy conditions, but by the time the team reached the top, the clouds cleared and the team were greeted by fantastic views across the Jotunheimen National Park.

The last few days of the trip saw the pupils enjoy some local sightseeing and a guided visit to the Klimapark (an ice cave carved into the glacier) to look at the impact climate change is having on the mountain environment.

On the final day of the Summer Term, 19 Marlburians joined three members of staff on a ten-day tour to the United States, setting off to re-discover the joys of touring as well as experiencing the impressive profile lacrosse enjoys in the USA.

The touring party spanned three age groups with the girls flying to Washington DC, with little recovery time before heading straight into the U16 World Championship Festival the following morning.

As well as playing matches against a range of competitive opposition from the USA and Canada, the girls were also able to support the 30 women’s elite Nations competing in World Championships at neighbouring Towson University.

This was followed by a wonderful time in and around Baltimore, enjoying a 300-store shopping mall and a trip to watch the baseball at the Baltimore Orioles, they headed north to Pennsylvania. The match schedule continued after an inspiring visit to the National Lacrosse Hall of Fame.

After our final game against True Lacrosse, we headed to Shawnee Golf and Country Club – home of the Kirkwood’s. A wonderful golf cart trail out to the 9th hole for apple pie and ice-cream was followed by rafting down the Delaware in the glorious sunshine. A 24-hour whistle-stop tour of New York completed the trip before the flight home.

In late August, the senior girls’ hockey squad travelled to Utrecht in Holland to participate in a preseason training camp. The tour aimed to prepare the girls for their demanding schedule of fixtures in England Hockey’s Tier 1 competition come September. The camp included some high-performance training matches against top Dutch opposition and an array of team-building activities and excursions.

We were based at the Kampong Club, a club with over 4000 members and 9 Astroturfs. The squad were fortunate to have both trained and played at some of the biggest and most successful clubs in the World. We were also treated to a specialist coaching session from Kampong and Ireland International David Harte, twice named World Goalkeeper of the year.

Three matches were played against quality Dutch opponents; MHV Massrsen, HC Eemvallei and Schaerweijide. Although the matches were tough, the girls showed grit and determination as they fought hard to the final whistle in every game, and I was pleased with the progress made. Off the pitch, the girls thoroughly enjoyed the post-match hospitality, dancing, singing and socialising with the opposition during match-tea.

The final day of the tour saw some rather tired girls embark on a relaxing canal cruise through the waterways of Amsterdam, followed by a gentle sightseeing walk around the city centre and an afternoon of bowling and a final team meal before an early departure to England.

Just before the start of term, 14 Upper Sixth pupils set off for the Brecon Beacons on their final expedition as part of their DofE Gold Award. The pupils had mixed weather over the four days, however spirits remained high throughout and all successfully completed the expedition. Well done to all 14 of the pupils who have now completed the expedition section of their awards, we wish them all the best with their remaining activities as they work towards completing their DofE Gold Awards.

At the same time, we had nearly 40 Lower Sixth pupils away on their Initial Training in Snowdonia, North Wales. This is the first of a three-part expedition training programme undertaken by pupils who sign up for the Gold Award. The weather in North Wales was slightly better than in Brecon, as a result the groups saw the mountains of Snowdonia at their very best.