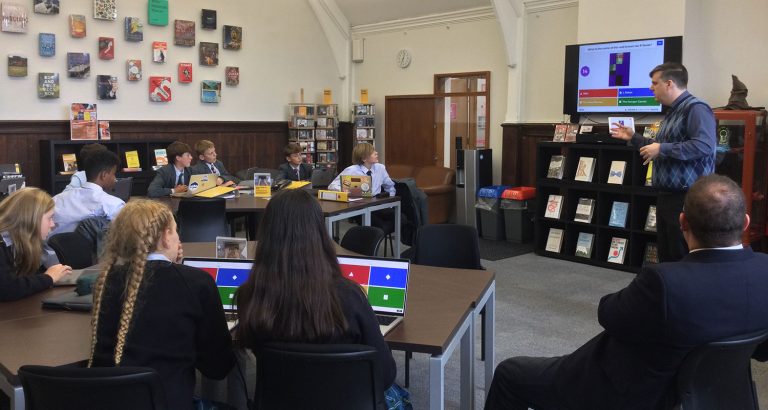 Michaelmas Term sees the start of a number of major independent research projects for pupils across the College, including the Extended Project Qualification (EPQ), and the Non-Exam Assessment (NEA) for various subjects. The EPQ in particular has long been recognised as an excellent preparation for university level research, with one academic noting that EPQ pupils are ‘six months ahead of their peers’ in terms of research skills. Fittingly then, the Memorial Library offers a tailored university-style research support service to all Marlborough College pupils. Pupils are able to book an appointment with a Librarian for a bespoke introduction to useful books, online databases, and research strategies.

Once again, this service has proved overwhelmingly popular, with over 150 sessions delivered on subjects as diverse as skincare, the navigational techniques of the Vikings, and mining in Mongolia! The sessions allow pupils to get to know what the library has to offer, and to gain the knowledge and confidence to continue researching for themselves.

This term also saw our fourth annual Hundred Research Prize. As the name suggests, the prize is open to Hundred pupils and is intended to offer an opportunity to go above and beyond their GCSE studies, as well as to encourage and reward excellent research skills. This year we asked: ‘How should we respond to the impact of climate change?’

Over 20 pupils submitted essays considering a range of factors such as population growth, carbon capture, and palm oil production. Leo F took first prize, with his in-depth look at how the field of healthcare can respond to climate change. Judges DTC (Deputy Head, Academic) and JEB (Head Librarian) commented that “your essay discussed the imperative to address not only the medical industry’s carbon footprint, but to improve training and research to ensure that doctors and support staff are able to better serve their communities as climate change continues to impact patients, materials and hospitals.”

Second prize went to Tom de B for his essay on political lobbying, while Dani L won third prize with her essay considering climate change through the lens of psychology and philosophy. Special mention was also given to Elliot R for his inventive essay questioning whether humankind should respond to climate change at all, and to Phoebe L for her essay comparing the impact of climate change on two young people, one in the UK, and one in Australia.

MC Reads is our new, termly, alternative book club: at the start of each term we’ll be recommending a selection of four books: two fiction, and two non-fiction, and we’re offering two prizes for the best reviews. There are no book club meetings to attend, but pupils are free to borrow and discuss books with their friends.
MC Reads launched in September with Heaven (Mieko Kawakami) and Midnight Club (Christopher Pike) as our fiction picks, while our non-fiction options were Divided: Why We’re Living in an Age of Walls (Tim Marshall) and Weapons of Math Destruction (Cathy O’Neil).

We had a great response this term, with Heaven, a heart-rending story about high school bullying, proving particularly popular. Tim Marshall’s Divided also got many readers thinking about political division, borders, and barriers.

MC Reads will return next term with another exciting selection of titles including Spare by Prince Harry, perhaps one of the most anticipated books of 2023!

In the meantime, we’d like to say a big thank you to everyone who participated in a library competition or attended a Library event this term.

The Library team wish everyone a peaceful holiday season, and we look forward to seeing you in the Lent Term!