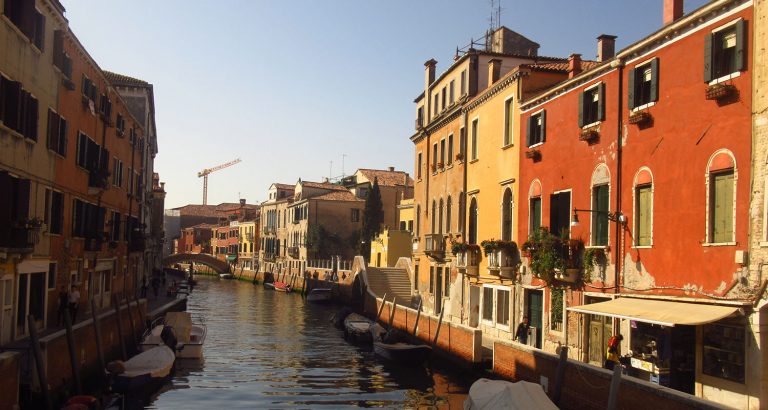 This four-day trip, populated by 22 keen academic scholars and members of the History And The Arts Society (HATA), took place at the beginning of half-term. Our purpose was to explore a great deal of the history of the city, largely through its incomparable art and monuments, though also through its characteristic quarters and the offshore islands.

We had warm weather and luminous, rather ethereal light, which emerged gradually from dawn mists that shrouded the city and the lagoon. Most of the pupils saw the mists: each morning an impressive number rose by 7am to see the Rialto fish market open, and to travel down the Grand Canal, which was thoroughly lugubrious until the sun appeared behind the campanile of San Giorgio Maggiore. It was not long before everyone knew their Carpaccio from their Giorgione, their Codussi from their Palladio.

Several of the pupils gave lectures, all in apposite places. Among these some were especially memorable: Iona G talked about the declining trade of the Venetian Empire as we watched the sunset from close to the Dogana (customs point) beside the harbour; Poppy G discussed the early settlers of the lagoon as our boat motored across the waters between muddy islets; Luli C discussed the Jewish minority in the square of the world’s first Ghetto, with Orthodox Jewish children playing football around us.

There was plenty of entertainment: in the late evenings we sat by silent canals and in dark courtyards telling ghost stories, and one afternoon a few of us performed the Gloria from the Magnificat of Monteverdi’s Vespers, to the amusement of the inhabitants of the parish of the Madonna dell’Orto. We walked heroic distances and visited at least ten major churches. The group mixed fun and learning very happily, and everyone was beguiled by the extraordinary city.

It was standing in the square of San Marco, bathed in the morning light, that I truly understood the magic of Venice. Having been given such grand descriptions of Venice, I was slightly sceptical that it was going to live up to the impossible standard that had been set.

Certainly, in the hour long walk into Venice along the roadside passing petrol stations and warehouses I was preparing myself for a let-down. Yet, standing in this piazza, surrounded by the Basilica of San Marco, I really understood what people had been talking about as they called Venice ‘the most beautiful place in the world’.

It was a hectic art, church and food filled week as we left our hotel, the Hotel Canada, at 8:30 and would not return back until near 12. We went from church, to gallery, to palace, and then to another church. However, it never felt like a struggle as round every corner was another stunning alleyway to explore. During the jam-packed week, we learnt all there is to know about Venice as we were taught about the arts, politics, religion, music, and even economics of the city.

It was a HATA trip, meaning that it did not just focus on history but also on the arts and culture. We learned how studying History and the Arts can go hand in hand and how they both heavily influence each other which was particularly important in Venice, a place filled with such art and incredible culture which contributes massively to its fascinating history.

Venice is a place in which every corner and alleyway is breathtakingly beautiful; however, I think a lot of us would agree that nothing was more beautiful that the San Marco Square and the buildings surrounding it. The Doge’s Palace was one of the most striking places we visited. It was massive and we spent almost three hours wandering around this palace, as every room was filled with art, from floor to ceiling. The most impressive was the Tintoretto that covered the entire wall in the main hall. What makes this painting so extraordinary is the five hundred large and incredibly detailed figures that this painting contains.

Overall, I think we can all agree that we gained a much greater understanding and appreciation for the history and the arts of Venice. I think this trip has led to many of those who went discovering a renewed interest in the arts, in particular the context it often has to the history of an area and the role it plays. Special thanks must be given to Mr Moule on organising such a wonderful trip. His passion for HATA has rubbed off on us all and I hope I will be able to go on a trip like this again.