When I began to write about the objects there was no great plan about how these should emerge. Ideas developed in a way that may seem haphazard, and yet there are some loose connections.

Object 1, the Bell Trophy, emerged in my thoughts because my favourite place to sit in the Chapel is about halfway down on the south side opposite the Canon Bell Memorial window where from time to time my eye would rest upon the memorial to Edwin Roscoe Mullins, the sculptor who made this extraordinary piece. Object 2, the bell from HMS Marlborough, simply followed on by association. The Preshute font, Object 3, is from a world far removed from Objects 1 and 2, but Preshute churchyard is where Canon Bell is buried. Object 4, the nameplate of the Marlborough locomotive, is in the Norwood Hall with HMS Marlborough’s bell. The science block gourd, Object 5, provides a change of gear, although of course the purpose of the building forms a connecting thread with the College’s piece of SR V Class heritage.

Later in this series there will be a degree of grouping, but sometimes objects will be selected just to ring the changes, and with apologies for the punning, on that note, more bells will be summoned.

The historian Mark Girouard wrote that in the latter half of the 19th century ‘chivalry was much in the air in the public schools…actual knights appear as school trophies and abound in statues or stained-glass figures’. At Marlborough ideas about chivalry permeated the College, with knights in armour on the reredos of the Chapel, talk of noble teamsmanship on the playing fields and the prize for the strongest academic House took the form of a military angel. The Bell Trophy, made by sculptor Edwin Roscoe Mullins (B2 1863–65), was a way of underlining the fact that boys should admire scholars as well as sportsmen. George Bell (Master 1876–1902), who presented this trophy after he left, was well aware that the latter enjoyed too much prestige and that the former needed encouragement.

Today the trophy is awarded at Prize Day each year to the House that has the best academic track record during the course of the year. It has become something of a joke that, because it is so heavy, it cannot actually be handed over to the representative of the winning House, who shakes the Master’s hand instead and leaves the trophy on the table.

2. The Bell from HMS Marlborough in the Norwood Hall 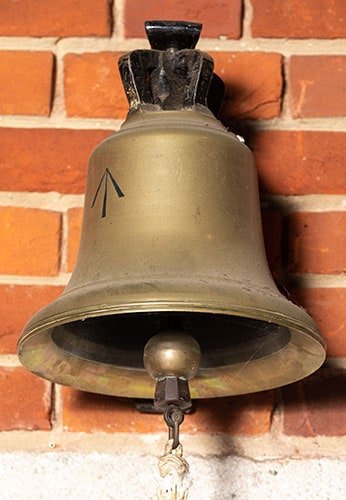 On 11th April 1919, less than a year after the assassination of the Romanovs, HMS Marlborough left Yalta carrying 17 members of the Russian imperial family into exile together with a cargo of treasures. The royal passengers were complex and difficult. They included the Tsar’s mother, the Dowager Empress Marie, and his sister, the Grand Duchess Xenia; Prince Felix Youssupov, the murderer of Rasputin; and Grand Duke Nicholas, former Commander-in-Chief of the Russian armies. The ring of this bell would have been part of their life on this strange voyage, described by Frances Welch in The Russian Court at Sea.

Very few people appreciate the history of the bell, which is used on 11th November when the school assembles in the Norwood Hall for the Act of Remembrance. It is also used by the Senior Prefects to silence the school during Christmas lunch so that the Norwood Hall staff can be thanked and applauded.

A golden gourd (a biblical fruit) surmounts the lantern at the top of William Newton’s extraordinary Modern Movement Science laboratory, completed in 1934. This ‘elegant factory’ is a very early instance of shuttered concrete construction and was the Old Marlburian architect’s solution to cutting the building costs in an age that presented severe financial difficulties. Newton was aware of the exciting architectural developments in Europe and the result is an important pioneering building. The Modern Movement disapproved of any ornament and decoration and the gourd that he designed would have been unthinkable on the Continent. Here, at the inception of modernism in England, is an architectural joke: the Senior Science Master was called Arthur Goard. It could be argued that Newton’s punning golden gourd is a pioneering postmodern work.

For years the gourd was painted white for ease of maintenance but in the 1990s some naughty but perceptive and well-intentioned pupils decided that it should be restored, and for a while it was a yellow and green spotted gourd. It has since been returned to Newton’s original scheme.

The 12th century font in Preshute Church, described by the architectural historian Pevsner as ‘truly amazing’, is almost certainly from St Nicholas’ Chapel, which stood in the grounds of Marlborough Castle, in the middle of what is now called ‘the Wilderness’. It is one of a very small number of Belgian Tournai marble fonts in the UK. Because of difficulties presented by transport, most of these are in churches near the coast or navigable rivers, so the location at Preshute makes this font even more remarkable. The commissioning of this marvellous object, its journey to Marlborough Castle and its removal to Preshute Church are likely to remain mysteries. It is almost certain, however, that Henry III was baptised with water held in this extraordinary piece of work.

The plate from the Marlborough ‘School Class’ locomotive hangs in the Norwood Hall. The SR V class, designed by Richard Maunsell, was the last locomotive in Britain to be designed with a 4-4-0 wheel arrangement and was the most powerful class of 4-4-0 ever produced in Europe. All 40 of these were named after public schools and were designed for semi-fast services on lines which could cope with high axle loads. Particularly fast for its size, locomotive crews believed this class was the finest constructed by the Southern Railway. The Marlborough was built in Eastleigh in 1934 and was withdrawn from service in 1961.