Housemasters in the College will be all too familiar with the sound sequence of bouncing ball, crash and tinkling of broken glass. Given the teenage male predisposition to throw or kick balls and objects when close to windows, it is remarkable that any old glass exists in C1, A House and B House, but some does remain.

Delicate glass objects abound in the College and the recent inventory made of heritage items in the Science building has underlined the importance of some of the old display cases and pieces of scientific equipment. Each year at Prize Day, the fragile Farrell Trophy is presented to the House with the most successful Lower School. The lens of the Barclay telescope should be mentioned here, but this latter object will be celebrated later on in this series.

With work commencing in 2021 on the extensive refurbishment of the College’s Science teaching facilities, the Crittall windows of the architect William Newton’s Science building of 1933 should be appreciated. George Turner (Master 1926–39) appreciated that ‘young scientists and their teachers need plenty of space and light’, and like other Modern Movement buildings the structure was designed to make the most of natural daylight. WF Crittall, known as ‘Mr Pink’, was director and designer of this pioneering company which was so closely associated with the most advanced architecture of the 1930s.

Two engraved windows will be discussed in this section as will some of the fine stained glass in Chapel. One Chapel window has already been mentioned in this series (Object 20). The great interior of the building changes dramatically in sunshine and shafts of coloured light can fall upon members of the youthful congregation, sometimes giving a surprisingly saintly aura to normally mischievous characters.

36. The West Window of the Chapel 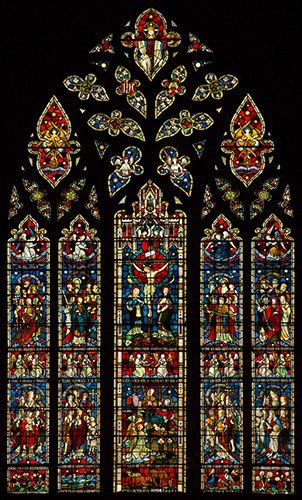 The west window in Chapel used to be the east window in the old chapel but it was reconfigured and moved when Chapel was rebuilt by the great ecclesiastical architect George Frederick Bodley between 1883 and 1886. The glass is exceptionally fine work by Clayton and Bell, set in tracery which Bodley based on the design of the west window of Durham Cathedral. The glass in the lower part of the window is particularly impressive, with beautiful depictions of plants, fishes in the sea and cattle. In late afternoon summer sunshine, the whole ensemble is profoundly impressive and the colour of Bodley’s superb interior—the greens and browns admired by Betjeman—is transformed by a golden blaze.

The partnership of John Richard Clayton and Alfred Bell was formed while they were both working in the practice of English Gothic Revival architect George Gilbert Scott. By 1861 they had moved into large premises in Regent Street, London, where they became one of the most prolific and proficient workshops of English stained glass during the latter half of the 19th century. With 300 employees, night shifts were worked in order to fulfil the large number of commissions. Unfortunately, the records of Clayton and Bell were largely lost after enemy bombing in the Second World War. However, their windows can be found throughout the UK, the United States, Canada, Australia and New Zealand. They made the West Window of King’s College Chapel, Cambridge, in 1878, but probably the most significant commission was to design the mosaics for the canopy of the Albert Memorial.

37. The Scholars Window in Chapel

In 1875 the window dedicated to the scholars of the College, on the south side of the Chapel, was one of the first to be produced by William Morris’s reorganised firm. Funded by donations from OMs, it depicts the biblical boys Samuel and Timothy. Dissolving the old firm of Morris, Marshall, Faulkner & Co. had been complicated. Morris felt his partners were focusing on their own interests and the collaborative energy of the firm had dissipated. Starting afresh he was in sole control but he was short of money, so the commission for the Marlborough window must have been welcome.

Morris (Aa 1848–51) was responsible for the overall design and the making of the glass, but the figures were drawn by his friend Edward Burne-Jones, father of Philip Burne-Jones (C3 1874–78) who had just started at the College. These have faded but the decorative foliage is still vibrant, and the window is important because of the early use of the acanthus leaf motif, one of Morris’s most successful designs. These anticipate the flowing organic forms of Art Nouveau in the 1880s.

It is interesting to note that at the time Philip Burne-Jones was preparing to enter Marlborough (at the suggestion of William Morris), his father was painting one of his most famous works, The Beguiling of Merlin (1872–76), the story relating to Merlin’s entrapment by Nimue, the Lady of the Lake. Merlin is, of course, supposed to be buried in the Marlborough Mound. The work was commissioned from Burne-Jones by Frederick Richards Leyland, a Liverpool shipowner and art collector. Burne-Jones held this man in great respect and designed a remarkable tomb for him in Brompton Cemetery, the only three-dimensional work ever designed by the artist.

To the north of the Chapel’s chancel is a small chapel which is almost a shrine to the world of Thomas Arnold, the great reforming Head of Rugby School. The east window was the gift of George Granville Bradley (Master 1858–70), one of Arnold’s pupils, who became Dean of Westminster (see Object 18). Beneath this window there is an inscription which states this is a memorial to Bradley’s predecessor as Dean, Arthur Penhryn Stanley, another of Arnold’s greatest pupils and his first biographer, who was a member of Marlborough’s Council between 1854 and 1880. Bradley was one of Stanley’s best friends and in turn his biographer.

Colin Fraser has observed that this contains a lovely example of a polyptoton—the repetition of a root word in a different form—in amici amicus, which captures nicely the closeness of their friendship.

After making his name as a teacher, preacher and writer at Oxford, Stanley became an important theologian and he was admired for all the reforms he undertook at Westminster. Although he did much to underline the importance of Arnold’s work at Rugby, the great headmaster’s fame also rests, in part, upon the hugely popular novel Tom Brown’s Schooldays (1857), written by another Old Rugbeian, Thomas Hughes.

Thomas Hughes grew up in Uffington in Berkshire, not far from Marlborough. Hughes was on the College’s Council between 1870 and 1895. There is a museum dedicated to his literary creation at Uffington, and it also celebrates the life of another local resident who is also an important part of Marlborough’s history, John Betjeman (B2 1920–25). 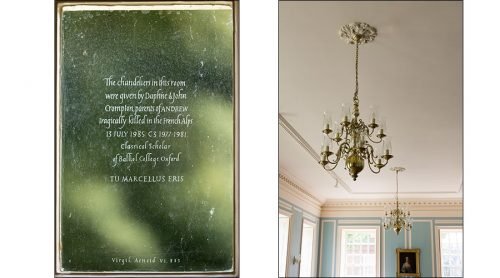 In the splendour of the Adderley there is a delicate memorial to Andrew Crompton, which takes the form of an engraved pane of glass. Andrew was a brilliant classical scholar who went on to Balliol College, Oxford, but he was killed in a climbing accident on the Eiger, aged 21. There is a Classics scholarship named after him and his mother also contributed to the construction of the Outdoor Activities Building and the Heywood Building, the home of the Classics Department.

The wording ‘Tu Marcellus Eris’ was chosen by Andrew’s Classics teacher, Clare Russell. Marcellus was the son of Octavia, the sister of Emperor Augustus. He died in 23 BC at the age of 19. This was a great blow to Augustus. Marcellus was a young man of huge promise, and the Emperor had intended him to marry his daughter Julia and to be heir to the new order he himself had created.

In Book 6 of the Aeneid, in the Underworld, Aeneas meets his dead father, Anchises, who shows him a pageant of the great men who will guide the future Rome to greatness. The culmination of this procession of heroes is a young man.

(0 lost, lamented child! If thou evade
Thy evil star, Marcellus thou shalt be)

In his biography of Virgil, Suetonius (c. 110 AD) writes that as Virgil read this part of his Aeneid to Augustus and his court, Octavia fainted.

Colin Fraser has commented that part of the power of the line lies in the way the sense of the line runs over in the Latin and then the natural break in the rhythm of the line (the ‘caesura’) coincides with the completion of the sentence. It has been said to be the passage of deepest pathos in the Aeneid, and the passage which contains the latest historical reference in the whole poem.

40. The City of London Memorial Window 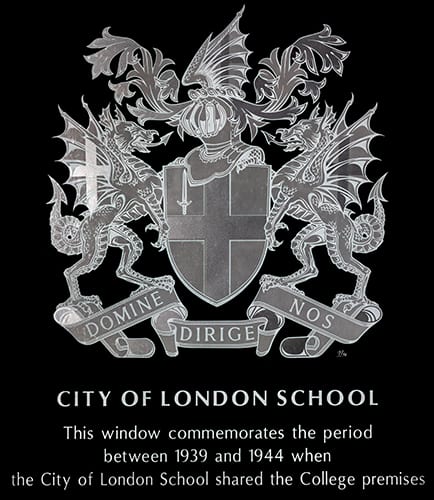 In 1994 a window was installed in the Bradleian Arches to commemorate the time that the City of London School spent at Marlborough during the Second World War. In 1938, the Headmaster of the City of London School, Francis Dale, made an agreement with the Master of Marlborough, George Turner, that the former should be evacuated to the College in the event of war. On 1st September 1939, following the German invasion of Poland, the majority of the school were sent to Wiltshire by train and stayed there until 1944.  The Citizen boys were housed in the town and they had their sport in the mornings and lessons in the afternoon, coxing and boxing with Marlburians. It was an extraordinary organisational juggling act which presented many challenges, particularly the problems presented by feeding an additional 500 boys.

Although they occupied many of the same buildings, the schools had little to do with one another. The Citizens did benefit from the existence of clubs and societies at the College though, and the young Kingsley Amis appreciated the Dramatic Society. Many schools were evacuated in this conflict, and even though the City of London boys were being accommodated at this time, in 1942 the College was considered as the site for the Ministry of Aircraft. A campaign involving RAB Butler and other distinguished figures prevented the removal of both schools.

PrevPrevious31–35: Explorers and Adventurers
Next41–45: MetalNext