There are all sorts of metallic objects of interest within the College. In the chimneys of B House there are metal ladder rungs which were used by boy chimney sweeps. The metal gates of the Porters’ Lodge, designed by the great Victorian architect George Edmund Street, are exceptionally fine, and the pioneering Modern Movement Crittall windows of the Science laboratories have already been mentioned in this collection.

There are of course numerous cups and pieces of silverware which could be mentioned here and one historically important trophy will provide a focus. The Art School possesses two marvellous early-19th century presses, a Columbian and an Albion, and on this note the now defunct Marlborough College Press should be mentioned, but the importance of this will be discussed later in the context of literary treasures. Forgotten metal pipes have cropped up inconveniently at regular intervals over the years, not least a water mains pipe which until a few years ago had somehow escaped notice after many years of marquee pegs having been driven into the grass of Court. The first object in this collection is one which the author feels particularly strongly about having enjoyed nine happy years as the Housemaster of B1, housed in B House (once the home of B2 and B3 as well), a great building which has been loved but misunderstood by far too many.

41. A House and B House Railings 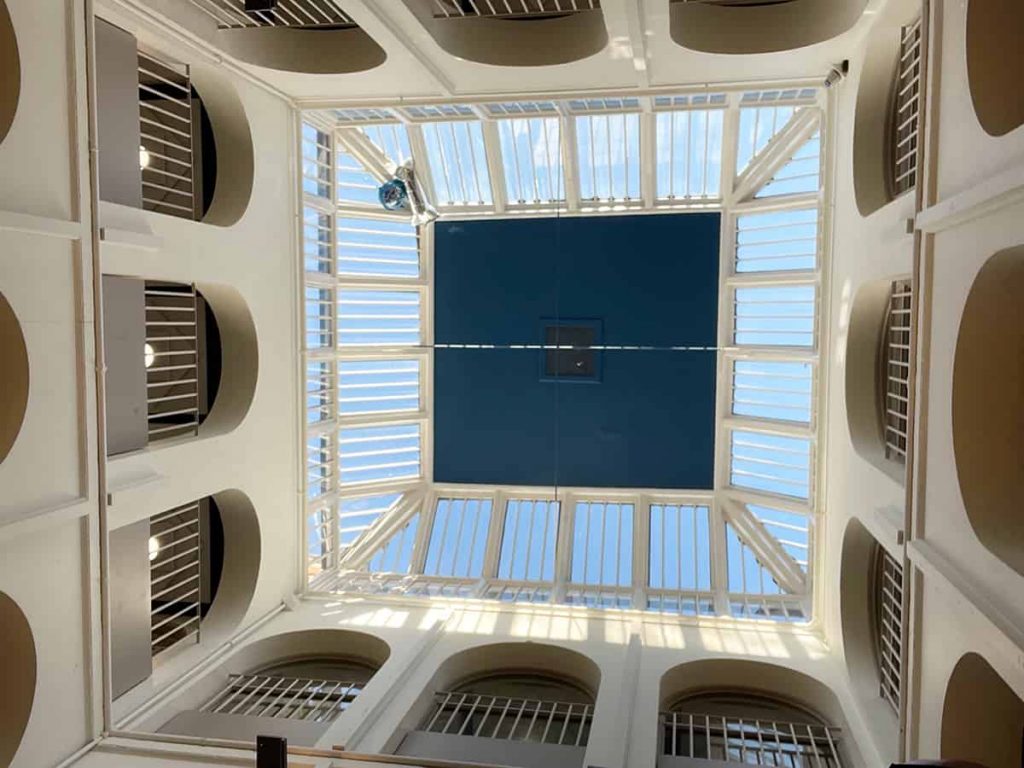 Ill-informed members of the Marlburian community have assumed that A House and B House were built to the designs of a prison architect. They were in fact the work of Sir Edward Blore, Surveyor of the Fabric of Westminster Abbey and architect of a substantial part of Buckingham Palace and many grand country houses. He was a friend of Prince Albert and Sir Walter Scott, a distinguished topographical artist and an antiquarian: he had nothing whatsoever to do with prisons. A House and B House are remarkable pioneering buildings which reflect the Victorian age’s ingenuity with new types of building appropriate for the changing times. Blore appreciated large residential buildings needed a central light source and an atrium could supply this. Iron railings did not block light from filtering through, and their strength made them boy-proof.

A House and B House were the first purpose-built boarding houses of any scale to be erected and they hold an important place in the history of school architecture. The railings and the columns in A House are of particular significance because they are a very early example of iron being used extensively in a residential building. Both A House and B House anticipate the development of tenement block architecture and are interesting early examples of communal housing, an area of increasing importance for many architects in the 19th century.

When Charles Bere arrived as a beak at Marlborough from Rugby in 1853, encouraged by the Master, George Cotton, who had recently arrived from the same school, he brought with him the game of rugby football. House competitions were held and in 1860 a new Football Committee was formed to organise the game. In 1864 a 20-a-side match was organised at Marlborough with the newly founded Clifton College. Unfortunately, the two teams played with different rules and Marlborough, unlike Clifton, banned the kicking of shins. The game degenerated and the Marlborough Captain, J A Boyle, urged the Master, George Bradley, to stop the game. ‘Win the game first and then talk of stopping’ was the response. Minutes later Boyle himself gained possession and in spite of two hacks, drop-kicked the ball between the Clifton posts, ending the game in a 1–0 victory.

This match was of great importance because it was the first inter-school rugby union fixture in England, and the organisation for the game must have raised considerable challenges. It was not until 1887 that Marlborough had another fixture with a school, and this time it was against Wellington. The Wellington boys were outraged when on their return home they bumped into their Master, Edward Wickham, future Dean of Lincoln, who instead of asking about the match said: ‘I am glad your game was at Marlborough – I hope you saw the beautiful chapel?’ He moved on without further comment.

In 1891 the fixture with Clifton was resumed and by the time the 150th anniversary of the game had been reached the schools had competed 120 times, with 59 Marlborough victories, 53 for Clifton and eight draws. The trophy itself, known as the Governor’s Cup, was donated in 1964, having originally been the prize for a Caribbean Horse Race. 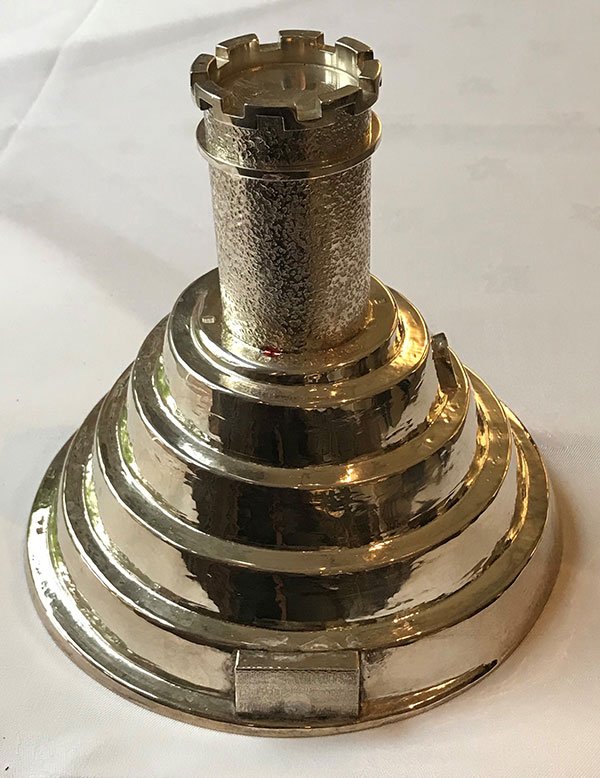 This silver decanter was the gift of Eric Elstob (C2 1956–60) to the Marlborough Mound Trust Committee, which met for the first time on 23rd January 2000. The Trust is charged with taking care of the 4,000-year-old Mound (see Object 12) and administering the remarkable bequest left by him to maintain and enhance this important monument at the centre of the College. The decanter is based on the form of the Mound with its spiral path and a representation of the Norman keep that used to be at the summit. After the Trust’s annual meeting a dinner is held and Eric Elstob is remembered in a toast.

Eric Elstob’s father was also called Eric (C2 1898–1902). He played first class cricket for the Navy and made a final appearance against the British Army at Lord’s in 1923. He returned to Marlborough College in 1933, alongside two other Old Marlburians who had served on the recently scrapped HMS Marlborough, and he presented the ship’s bell to the College. The extraordinary story behind this bell, now in the Norwood Hall, has been mentioned in this collection (Object 2). 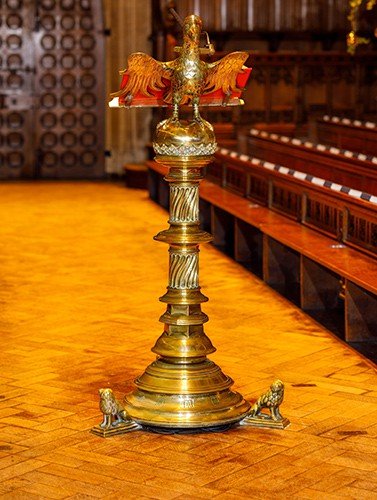 Until the mid-19th century it was highly unusual for a school to have its own private chapel. The medieval foundations of Winchester and Eton had their own places of worship, and Rugby School built a chapel just before the arrival of Thomas Arnold, the great headmaster who transformed Rugby between 1828 and 1842. The construction of the first chapel there had required the permission of Parliament, such was the anxiety caused by private chapels. Initially school chapels were treated with suspicion by local clergy and there were fears they could become troublesome and used to steer communities away from Anglican orthodoxy. It was Arnold, though, who showed how schools could be transformed by making the chapel the central focus of daily life, and after the middle years of the century chapel building became a necessity as schools outgrew local parish churches. Marlborough College ceased collective worship in St Peter’s in 1848 when the school’s first chapel, designed by Edward Blore and one of the earliest Victorian school chapels, was completed.

The Marlborough lectern is a magnificent object and at the time of writing it is not known who made it. There is a photograph of it in place by c.1862, and it may have well been installed when the chapel was opened. It is a relatively early example of the revival of the medieval-styled brass lectern which came in the wake of Pugin’s pioneering work in the Gothic Revival. Interest had been aroused by the discovery of pre-Reformation lecterns such as the one at Oundle, which had been fished out of the River Nene in the early years of the century. One was found in the marshes at Isleham in Cambridgeshire, another in the churchyard of Snettisham in Norfolk, and perhaps the most remarkable discovery was Norwich Cathedral’s pelican lectern, retrieved from the garden of the Bishop’s Palace and returned to the Cathedral in 1841. In the same year, Pugin’s magnificent interior of the Roman Catholic Cathedral of St Chad in Birmingham was furnished with a splendid eagle lectern.

Marlborough’s lectern may well have raised a few eyebrows as being a suspiciously ‘Pope-ish’ object in an Anglican foundation. It would certainly have stood out in an otherwise austere interior until the 1870s when the Master, Frederick William Farrer, embarked on his splendid decorative schemes which included the Spencer Stanhope paintings of the Ministry of the Angels. The lectern was something of an extravagance for an impecunious new foundation, and perhaps a reflection of the force of the Arnoldian reforms which gave birth to the Victorian public school. 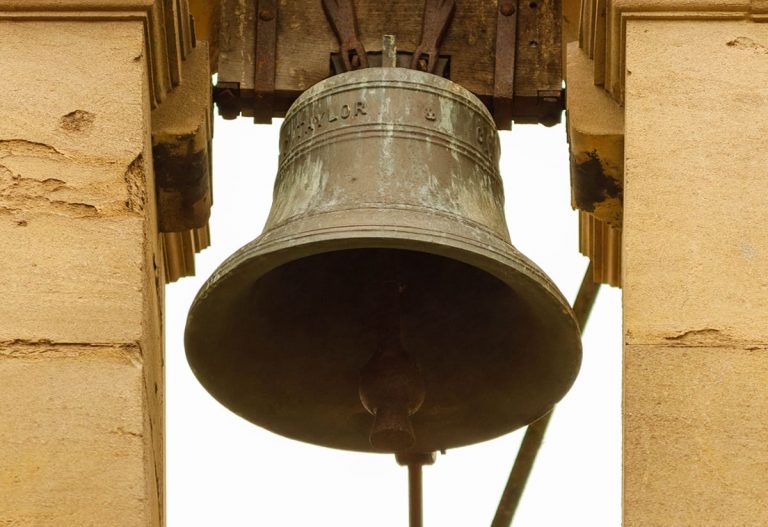 In the television programme made in 1976 of John Betjeman’s autobiographical work Summoned by Bells there is one moment which speaks of present day life at the College. The bell tolling above the Porters’ Lodge sounds just the same as it does today, and indeed it must have sounded the same in 1877 when George Edmund Street, the celebrated Victorian architect, built the extraordinary architectural ensemble at the entrance to Court which included the bell cote.

Street, architect of the Law Courts and restorer and builder of hundreds of churches, was one of the greatest figures in the profession and his office was one of the most important nurseries of the Arts and Crafts movement. In 1870 he became the College’s architect, but at Marlborough he built nothing in his usual Gothic style. The Bradleian is in a loose 17th century style and the cloisters nearby are a form of Romanesque. Cotton and Littlefield are two of the earliest concrete structure designed for residential use, and the Porters’ Lodge and the entrance gates are a free interpretation of Baroque.

It is a blessing that the rhythm of school life around Court is controlled by the traditional bell rather than an electrical equivalent. The tolling of the bell is triggered automatically but until the final years of the 20th century it was rung by the porter. Street’s bell cote nearly had a rather larger rival when it was proposed to build a huge campanile to designs by George Frederick Bodley just north of the Chapel in order to celebrate the College’s 50th anniversary in 1893. The project was abandoned and the North Block classrooms and the building now called the Memorial Library were built instead.

The chapel bell also deserves to be mentioned here. Grainne Lenehan, the College’s archivist, has discovered the cost of the bell for Bodley’s new chapel, including carriage, was £47.5.2. It is interesting to note that the annual school fee in 1886 was £80 for education and maintenance, and £50 for the sons of clergy.