There are many fine trees scattered around the College’s grounds. Sadly, one of the most interesting and beautiful of these disappeared six years ago. The great Copper Beech which Tennyson planted in the Master’s Garden in the 1860s suddenly fell to pieces. Fortunately, many new trees have been planted and in the campus master plan which is being drawn up for the grounds, great care will be taken over the College’s arboreal heritage.

Structurally, there are many interesting pieces of timber construction in the College. The most remarkable wooden roof was designed by the great Cambridge Modernist David Roberts for the Norwood Hall. When it was completed in 1962, it may well have been the broadest wooden roof ever built. Hidden from view, the wooden beams in the roof of Morris House were made from timber imported from Russia just before the First World War. Now almost hidden from view in a corner of the Common Room garden is the William Morris Arbor which began its life at the Chelsea Flower Show in 1996, the centenary of Morris’s death.

There are of course many pieces of wooden furniture which speak of the College’s past, and house rolls of honour, painted beautifully on boards, adorn some of the older houses. With recent rearrangements in the Memorial Library, the name of the First World War poet Charles Hamilton Sorely was discovered graffitied on wooden panelling along with many other names. Looking to the future, it is to be hoped that the wood from the yew trees which grew wildly on the Mound after Lady Hertford’s years in the 18th century will be used to make artefacts which will connect the College’s past with the present. 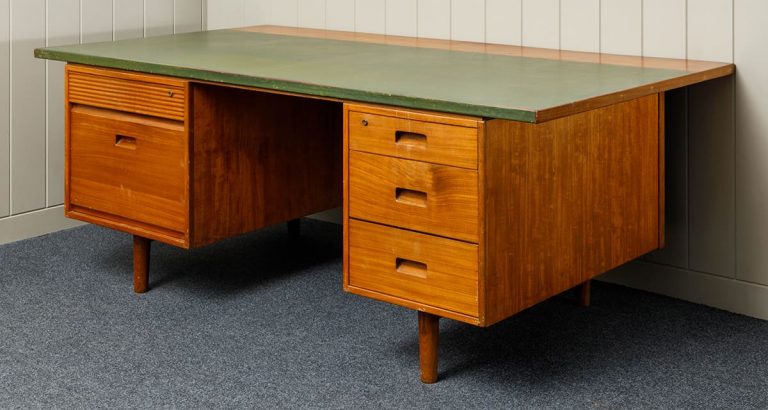 Dancy House opened in 2016 in The Hermitage as its present home was not completed until 2018. The house is named after John Dancy, the Master (1961–72) who introduced co-education to Marlborough in 1968. Dancy was a revolutionary figure who did much to change the face of independent education. He looked at broadening access almost half a century before it became such an important cause. He developed the curriculum in many ways and challenged the traditional tenets of the public school world.

As John Rae observed in The Public School revolution (1985): ‘Dancy was one of the very few headmasters who had a clear idea of what needed to be changed in the public schools and of how that change might be effected.’ It was a chance remark by his friend the philosopher Bernard Williams which inspired Dancy. They were discussing the poor prospects of getting any social desegregation of public schools and Williams said (roughly): ‘I can’t understand why you don’t get on with what is easily within your power, the sexual desegregation of Marlborough.’ Dancy acted swiftly and, according to Rae, ‘set about the jettisoning of most of the remaining barbarities and absurdities’ which had been part of public school life. Dancy feared there would be a backlash to the progressive developments of the 1960s and felt that girls would consolidate the liberal position in such a way that there could be no turning back. He was keen to underline his wife Angela’s role in taking this step and she was a key figure in the early days of the girls at Marlborough. Other schools followed in Marlborough’s wake, and the rest is history.

When he left the College, Dancy was asked what he would like as a token of appreciation, and he chose to take his desk with him. At this desk he must have written much that was to prove so influential. He gave this piece of furniture to the new boarding house on the occasion of its opening.

John ‘Pat’ O’Reagan was a popular beak who worked at the College between 1896 and 1922. He was much admired by Siegfried Sassoon, who wrote that he was the only person at the College who asked him to write poetry. A colourful and eccentric man, O’Reagan had a suit of armour made to help him with his history teaching, and in 1911 he built a remarkable home inspired by a Roman villa (Killycoonagh) above the College. The house is fictionalised in the first novel of Beverley Nichols (C2 1912–16), Prelude (1920). For a while there was a close association between Sassoon and Nichols.

O’Reagan was Housemaster of B3 between 1907 and 1911, and prepared the house for its move from B House into the new Field House, now Morris House. He commissioned a fine throne which he gave to the house in 1909, and for many years this was the Housemaster’s chair in B3. The throne is adorned with the names of many Heads of House and the motto of the house in Greek, ‘Beautiful things are difficult’, is carved at the top of this fine piece of furniture.

With the closure of B3 in 1992, it was inherited by C2 and for a while it was kept in the house library where it was much treasured by a small group of free-thinking C2 boys called the B3 Society. The throne now has a quieter life in the archives in the basement of B House, but it is good that it is back in the building from whence it came. 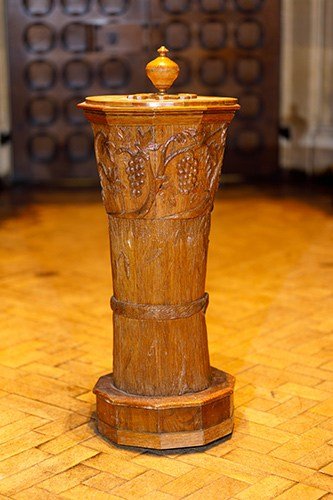 The Chapel font was made by Dave Rawlings, the woodwork teacher between 1975–98 whose workshops provided a remarkable home and indeed refuge for generations of Marlburians. All were welcome and many remarkable works were produced under his guidance. As Edward Stancliffe (C1 1988–93) observed, ‘whenever the workshop was open, tea, coffee, stories, laughter and M&Ms were always on offer. For some, time spent in Dave’s workshop will be the highlight of their school years’. There are pieces by Dave Rawlings throughout the College. He carved the font to celebrate the 100th anniversary of the opening of the Chapel in 1886.

Fletcher, Master from 1903–11, was ‘the most gifted classicist of his generation’ whose pupils included the economic historian RH Trelawney, the Great War poets Charles Sorley and Robert Graves, two future headmasters (including Tommy Garnett of Marlborough) and Archbishops of Canterbury, William Temple and Geoffrey Fisher.

When Fletcher left Marlborough, reluctantly, to rescue Charterhouse from a period in the doldrums, his portrait was painted by George Harcourt, but he disliked this and wished to be remembered in another way. As a parting gift to the College, he had the Sixth Form room in Museum block (now M1) repanelled in oak and an inscription was placed on the fireplace: ‘Sextae Marlburiensi Francus Fletcher Magister Discedens Desiderans Multarum Amicitarum Memor’ (To the Marlborough Sixth Form (from) Frank Fletcher, the departing Master, in fond memory of many friendships).

Frank Fletcher’s chair was restored around 1987 thanks to Colin Fraser. It now resides in the classroom of the Head of Classics.

50. The Table in the Smoking Room 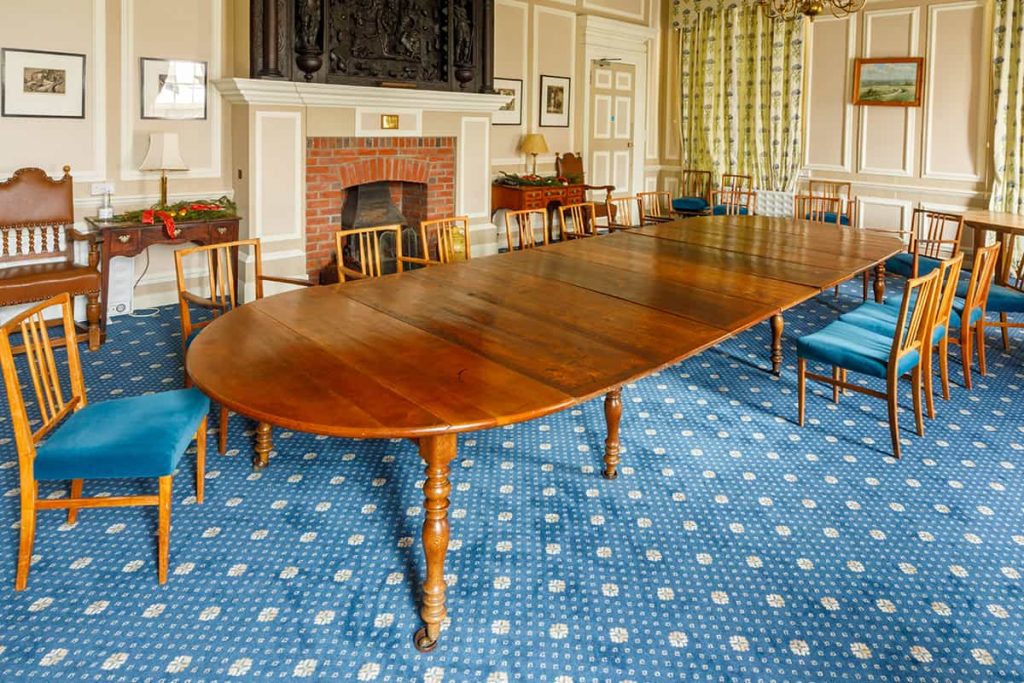 The fine early 19th century table was the gift of Paul Orchard Lisle, Chairman of Council between 2001 and 2006. It came from the dining room of Le Chateau de La Lucerne D’Outremer in Normandy. Before this, it was in a chateau in a place which, like Marlborough, was frequented by King John: a tenuous connection perhaps but a pleasing one.

The room is used for numerous meetings and at this grand table important decisions are made by Council about the way ahead for the College.  Needless to say, smoking is no longer permitted in this room.